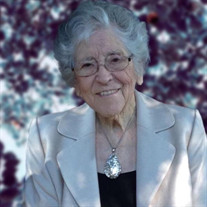 Celebration of life for Jessie I. Lingenfelter will be 2:00 p.m., Thursday, April 21, 2022 at First Baptist Church Chapel, burial will follow at Woodlawn Cemetery. Friends may visit at MMS-Payne Funeral home on Wednesday, April 20 from 3pm-8pm, with family receiving visitors from 6pm-8pm. Jessie passed away on Saturday, April 16, 2022. She was 107. Born December 11, 1914 in Perkins, Oklahoma to Robert and Ethel (Hedrick) Webb, Jessie was reared and educated in Pryor, Oklahoma. She graduated with the class of 1933, and in 1934 Jessie married Ralph Lingenfelter. The couple made their home in Claremore, and together raised their three children. A wonderful wife and mother, Jessie took great care of her family while Ralph operated the Lingenfelter's DX Station at 301 W. Will Rogers Blvd. When Ralph passed in 1971, Jessie worked at the Claremore Hospital, then she worked at Lowrance Electronics, later she was the greeter at the J.M. Davis Gun Museum. When Jessie wasn't working, she could be found at her favorite fishing spot, shopping, or visiting friends. She also loved to cook for her family and enjoyed spending time with them. Jessie was very determined to stay independent throughout her life, and she contributed this to her never smoking or drinking, and making sure she was at church every Sunday. Jessie didn't like giving her age until she was well into her 90's. She never left her home not looking her best and never looked her age. Those family members that survive include her children, Jerry Lingenfelter and wife Latricia, Tom Lingenfelter and wife Judy, and Carol Jones; grandchildren Scott Lingenfelter and wife Sarah, Ann Lingenfelter, Alycia Pennington and husband Scott, Laura Lingenfelter, Jennifer Roberson and husband Jon, and Brian Cowan and wife Becky; great-grandchildren Cameron Pennington, Hunter Winingham, Chapman Pennington, Grant Winingham, Landon Winingham, Reece Winingham, Michael Cowan, Jayme Pennington, and Alex Pennington; niece Judy Wheatley and many other nieces, nephews and extended family. Jessie was preceded in death by her parents, husband Ralph Lingenfelter, her six sisters, and a favorite nephew, Tom Wheatley . Jessie's family would like to recognize the staff and residents at Courtyard of Claremore. They became Jessie's other family of love and support!! They made the last 6 1/2 years of her life so much richer and fun filled. Those who wish to honor Jessie's memory with a memorial contribution may contribute to First Baptist Church, 107 East Will Rogers Blvd., Claremore, Oklahoma 74017.

Celebration of life for Jessie I. Lingenfelter will be 2:00 p.m., Thursday, April 21, 2022 at First Baptist Church Chapel, burial will follow at Woodlawn Cemetery. Friends may visit at MMS-Payne Funeral home on Wednesday, April 20 from 3pm-8pm,... View Obituary & Service Information

The family of Jessie I. Lingenfelter created this Life Tributes page to make it easy to share your memories.

Send flowers to the Lingenfelter family.