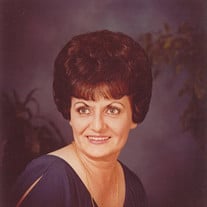 Funeral service for Jessie Irene Martin will be 2:00 pm Friday, December 4, 2020, at Chelsea Funeral Home Chapel. Burial will follow in Chelsea Cemetery. Friends may visit at the funeral home on Thursday, December 3, 2020 from 1-8 pm. Jessie passed away at her home in Tulsa on Sunday, November 29, 2020, at the age of 81. The daughter of George Burton Seely and Jessie Lula Pearl (Hibbard) Seely was born September 13, 1939, at Winganon, one of 19 siblings. She grew up in the Chelsea area, graduating from Chelsea High School in 1958. While working as a waitress at Jack's Cafe, she met Carl Richard Martin. The two were married at the parsonage of the Washington Baptist Church on June 21, 1958. The newlyweds lived in Turley for a time before Carl began his service in the U.S. Army. The couple lived in Tacoma, Washington while Carl was stationed there. When he was discharged, they settled in Tulsa, Oklahoma. In her spare time, Jessie enjoyed making fudge and pumpkin pies, and working jigsaw puzzles. She also loved gardening, growing lots of tomatoes to give away. But by far, her favorite activity was spending time with her family. Jessie was preceded in death by her parents and sixteen siblings. Those left to mourn her passing are her children, Carla Aley and Shelly Miller and husband Jim; grandchildren Heather Aziere, Amber Aziere, Jessica Aley, Stacey Nester, and Justin Miller; brother Jim Seely; sister Bettie McClary; and great-grandchildren Duncan Raiber, Sterling Aziere, Braden Fell, Kimber Miller, and Jay Miller. View and sign Jessie's online memorial at www.mmsfuneralhomes.com.

The family of Jessie Irene Martin created this Life Tributes page to make it easy to share your memories.

Funeral service for Jessie Irene Martin will be 2:00 pm Friday,...

Send flowers to the Martin family.