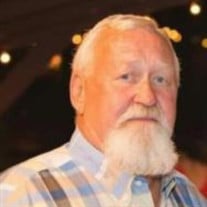 Jimmy Van Bacon was born December 9, 1949 to Miles Dana “Dink" and Ruth (Dennis) Bacon of Chelsea, OK. He was the couple's fourth child, behind Ruth Ann, Robert Norton, and Milene Dana. Jimmy arrived at Franklin Hospital in Claremore, OK and grew up on the country backroads of Rogers County in between Claremore and Alluwe.  Youngest sister Mary Jane was born in 1956 and the family moved to Chelsea in 1960.  Jimmy graduated Chelsea High School Class of 1968 and attended technical school at United Electronics Institute in Dallas, TX from 1969-1971 focusing on electrical/electronics maintenance and repair technology.  From 1971 to 1973, Specialist Bacon honorably served in the Unites States Army  stationed in South Korea, 12 miles from Seoul near the DMZ at Hill 468, near the village Uijeongbu. He was awarded National Defense Service Medal and Armed Forces Expeditionary Medal. Upon his return from Korea, Jim continued his electrical and electronics education at OSU Okmulgee, graduating in 1975 with his degree in Industrial Electronics.  In the early 1980’s, when Centrilift was Claremore's hottest new startup, Jim worked on the install of the equipment at the company's new cable plant. A decade later in 1993, he joined the International field service team where he worked across the globe leading successful installation and support of Centrilift products for the world's largest energy companies.  Fittingly, his last years before retirement in 2014 were devoted to the training and career development of Baker's next generation of technical service engineers.  In 1977, he married Mickey Maggard. They lived first in Odessa, TX and then on School Court in Claremore, OK with children Brandi Rae, Jada Rene, and Miles DeWayne Bacon. However, Jim wouldn’t meet the love of his life until the mid-1980’s when niece Angie Hunt introduced him to Glenda Boykin, also of Claremore. Jim and Glenda’s 35+ year love affair was formalized on September 15, 1985 and the family grew by two as daughters Kaysie Danielle and Jamie Lynn arrived.  Jim took great pleasure in experiences: going fishing, traveling with his friends and family, music and concerts, long motorcycle rides, and having a good time.  As the life of the party, he filled the room with genuine love and made something of each chance he had to joke, surprise and delight.   His joy in recent years was found in being Grandad to Jimmy Liam and Kaydin Simpson, Annin Ruth Bacon, Jacob, Sarah, Elizabeth, Joseph, Hannah, and Daniel Monzingo, Chebon and Chandler Lewis, Charles Weeks, and James Hendricks and Great Grandad to Kameron. At the time of his passing, Jim was Uncle Fuzz to dozens of Dink and Ruth’s descendants and informally adopted members of the Bacon family, including Stephanie Koss, Sarah Braly Smith and husband Jesse, and Matt Raulston. Jimmy Van Bacon died on September 18, 2020 at his home a few miles away from his birthplace and was preceded in death by his parents, Dink and Ruth Bacon, his two older sisters, Ruth Ann Weaver of Ochelata, OK and Milene Dana Hunt of Chelsea, his nephews Miles “Buckshot” Hunt and John Michael Humler, also of Chelsea, and a grandson, James Hendricks. He is survived by wife Glenda Bacon; children Brandi and spouse Kermit Monzingo, Jada Lewis, Miles Bacon, Kaysie and spouse Jimmy Simpson, and Jamie Bacon; brother Robert and sister Mary Jane; twelve grandchildren, one great-grandchild and many loving nieces and nephews.

The family of Jimmy Bacon created this Life Tributes page to make it easy to share your memories.

Send flowers to the Bacon family.