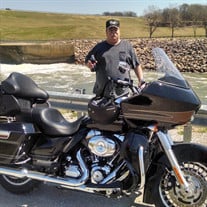 A memorial service for Joe Bartles will be at 10:00 a.m. Friday, April 1, 2022 at MMS-Payne Funeral Home Chapel.  Joe passed away on Monday, March 28, 2022.  He was 71.   Joe Bartles was born in Claremore, Oklahoma at the old Franklin Hospital on December 21, 1950 to Cleo and Rosa Lee Bartles.  He, his brother and his sister were "Army Brats" and grew up moving between Ft. Benning, GA, and Hanau, Germany.  When his father retired in 1965 they moved off base in Columbus, GA until 1966 when they moved back to Claremore, Oklahoma where he attended Jr. High and High School.  In March of 1970 he was drafted into the U.S. Army. He did basic training at Ft. Lewis, WA, and advanced individual training at Ft. Sill, OK.  In August 1970 he was assigned to B Battery, 6th Battalion, 27th Field Artillery in the Republic of Vietnam until August 1971. He then returned to Ft. Sill, OK for a short time until he got out and returned to Claremore. 11 months later he returned to the Army at Ft. Sill.   On May 5th, 1973 he married the love of his life, Sandra Marie Jantzen.  Together for the next 19 years they moved between assignments in Texas, Germany, and Colorado.  In 1992, he retired after 22 years of service at the rank of Master Sergeant, at Ft. Carson, Colorado in Colorado Springs.  After retiring, he went to truck driving school. He then drove for West Way and Hugh M. Woods Lumber Co.  In 1996, they decided to move back to Claremore, Oklahoma where he drove a mixer truck for 14 years with Midcontinent Concrete where he later retired in 2011.   Along the way he and Sandi raised three great kids: Michelle, Jodi and Scott. He considered them his greatest accomplishments.  He was preceded in death by his parents, Cleo and Rosa Lee Bartles, his younger brother Edward Bartles and his grandson Kage Green.  He is survived by his wife Sandi; daughters Michelle LeClair and her husband Dustin, Jodi Couch and her husband John, and his son Scott Bartles all of Claremore; his sister Diane Leonard and husband Anthony of Pine Mountain, GA; sister-in-law Charlotte Bartles, also of Claremore as well as multiple nieces, nephews and cousins, friends and brothers in arms. He also leaves behind 3 wonderful granddaughters, Raeli Green, Adison Couch, and Waverly LeClair; as well as a wonderful grandson Isaac Couch. If there are those who wish to make a donation in Joe's honor, in lieu of flowers, may give to the St. Jude Children's Hospital, 501 St. Jude Place, Memphis, TN 38105.

A memorial service for Joe Bartles will be at 10:00 a.m. Friday, April 1, 2022 at MMS-Payne Funeral Home Chapel.  Joe passed away on Monday, March 28, 2022.  He was 71.   Joe Bartles was born in Claremore, Oklahoma at the old Franklin Hospital... View Obituary & Service Information

The family of Joe Bartles created this Life Tributes page to make it easy to share your memories.

Send flowers to the Bartles family.