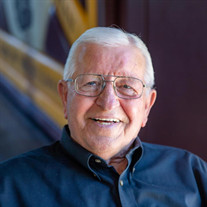 Memorial service for Joe Kiger will be held at 2:00 p.m. Tuesday, March 23, 2021 at the Bella Donna Event Center in Catoosa.  Pastor Steve Posey will officiate.  Mask will be required.  Larry Joe Kiger passed away on Friday, March 19th, 2021 at the age of 81.  The son of P.I.  and Madge (Brashears) Kiger was born July 4, 1939 in Panama, Oklahoma.  There Joe would spend his entire childhood.  As he began his journey into high school, it was evident that Joe was a gifted athlete.  He played basketball, and  baseball, but excelled on the football field.   It was that talent, that after graduating in 1957 landed him a scholarship at Oklahoma A&M University in Stillwater.  Fate would soon have Joe accepting another scholarship.  This time it would be at Northeaster State University in Tahlequah.  He would play there from 1958 through 1961; helping the team win the 1958 National Championship.  However football wasn't the only thing Joe would find in Tahlequah.  He would meet the love of his life Beverly McNabb there as well.  They began dating, and married on October 1, 1958.  After completing his Bachelors degree in Education at NSU, Joe and Beverly moved to Stillwater.  There Joe began working as a graduate assistant for the football team, coaching freshman.  All the while, he was working on his masters degree.  Upon graduating Joe took his first job coaching at Guymon High School.  A few years later he would move to Tulsa where he took a  job coaching football and golf at Edison High School in Tulsa.  As time went by, Joe  decided to leave coaching behind.  He began working in the insurance business until taking a management position with McNabb Rock in 1983.  He would work there until the plant closed in 1994.  Not quite ready to retire Joe started Management Plus a trucking company he ran until retiring in 2002.  Although Joe did have an accomplished working career, he still had more to give.  As his kids were growing up he was always involved.  He helped coach little league baseball and football for Ky and never missed a game even while he was playing in college.   When Kayce and Brooke needed him, he was there as well eager to lend a helping hand.  However everything changed when his grandchildren were born.  This era presented him with his greatest job of all, being a full time Papa.  He loved it when he could pick them up from school and take them out for their favorite snacks.  He loved to be at all the events such as  basketball, softball, cheer, soccer, and all school activities.  Although he was just as happy sitting at home watching them fish or go swimming.  To say he was a true family man would be and understatement.  Joe also loved giving back to his community.   He proudly helped serve his church, the First United Methodist Church of Catoosa.    He was active with the Catoosa Historical Society and the Catoosa Chamber of Commerce and The Catoosa Annual Reunion (formerly Oldtimers Reunion).  In 2008 along with Beverly he was honored for his contributions by being selected as Catoosa Chamber of Commerce Co-Citizen of The Year.  . He also enjoyed volunteering at the Annual Catoosa Christmas Parade and many of the Catoosa School Bond Election Campaigns.  He also stayed active helping the NSU Athletics Alumni Association where he served on the Executive Board as Vice President for several years.  Helping them organize the yearly golf tournament as well as other events. His accomplishments at NSU were acknowledged in 2007 as he was inducted into the NSU Athletic Hall of Fame.  He was inducted into the Edison High School Coaching Hall of Fame as well.  He is preceded in death by his parents P.I. and Madge Kiger and brothers Davey, Ronnie and Benny Kiger.  Survivors include his wife Beverly; son, Ky Kiger and wife Theresa; daughters, Kayce Nelson and husband Doug and Brooke Mirabal and husband Rey; grandchildren, Kabry, Kally, Kenlee, Reese, Addison, Baylor, Justus and Markus, and sister Sue Irvin. Donation can be made in Joe's memory to the Catoosa Historical Society PO Box 738, Catoosa, Ok 74015 View and sign Joe's online memorial at www.mmsfuneralhomes.com

Memorial service for Joe Kiger will be held at 2:00 p.m., Tuesday, March 23, 2021 at the Bella Donna Event Center in Catoosa. Please wear your masks.

Send flowers to the Kiger family.