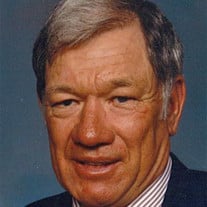 Service for Joell Warren Sanders will be 2:00p.m., Tuesday, December 17, 2019 at First Baptist Church, Claremore, burial will follow at Woodlawn Cemetery. Friends may visit at the funeral home on Monday, December 16 from 1pm-8pm, with family receiving visitors from 6pm-8pm. Joe passed away on Friday, December 13, 2019. He was 92. Born May 6, 1927 in Broken Arrow, Oklahoma to Samuel Steven and Ava Electa (Johnson) Sanders, Joe, with his family made several places home through his younger years. At the age of 16, Joe traveled to Kansas City to work on the rail road and 17 days before he turned 18, Joe enlisted with the Navy and proudly served his country during WWII and later served during the Korean War. Joe met Ollie Lee Hibbs when he returned from the Navy. She was 14 and he was 19. They married in Pryor two years later on June 4, 1949. Home for the couple was San Diego for a time before moving to Claremore. With the exception of Garland, Texas, Claremore has been his home. Joe worked for Safeway as manager for 15 years before going into construction and sub contractor business. He was self employed for many years in the concrete industry and never really retired. Although Joe was a hard worker, who provided for his family, he did enjoy spending time fishing, hunting and camping. He also made a garden each year, or you might say several gardens, that could supply a small town with its harvest. He followed his kids and later grandchildren with their sporting events and always cheered for his St. Louis Cardinals. Joe was spiritual man and attended church and brought up his kids in church. He served as a deacon and was the one who said the blessing before every meal. Those family members that survive include his children Mike Sanders and wife Lynn, Jerry Sanders and wife Dianna, Stan Sanders and wife Danna; his grandchildren Shawn Sanders and wife Emilee, Kristin Roseberry and husband Beau, Jarrod Sanders and wife Kim, Chris Sanders and wife Jordan, Greg Sanders, and Jamie Howell and husband Boyd; his great grandchildren Trigger, Carder, Logan, and one on the way, Avery, Laney, Jackson, Emmy, Julie, Nora, Evelyn, Jonas, Brooklyn, and Rhyland; his sister Shirley Chambers. Joe was preceded in death by his parents, wife, Ollie, brothers Jim, Paul, and Leroy, sisters Virginia Shaffer, Betty Dale, and Sylvia Sanders.

Service for Joell Warren Sanders will be 2:00p.m., Tuesday, December 17, 2019 at First Baptist Church, Claremore, burial will follow at Woodlawn Cemetery. Friends may visit at the funeral home on Monday, December 16 from 1pm-8pm, with family... View Obituary & Service Information

The family of Joell Warren Sanders created this Life Tributes page to make it easy to share your memories.

Service for Joell Warren Sanders will be 2:00p.m., Tuesday, December...

Send flowers to the Sanders family.