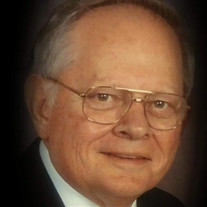 Service for John Anderson Akin will be 10:00 a.m., Thursday, September 3, 2020 at New Life Baptist Church, burial will follow at Oakhaven Memorial Gardens. Friends may visit at the funeral home on Wednesday, September 2 from 1pm-8pm, with family receiving visitors from 6pm-8pm. John passed away on Friday, August 28, 2020. He was 78. John Akin was born May 3, 1942 in Claremore to John and Elarie (Taylor) Akin. He graduated from Claremore High School with the class of 1962. On September 28, 1962 John married Shirley Sumter and together they raised 2 children. He began working at the state highway department as a surveyor. Soon after, in 1964, he started work at the Claremore Police Department and retired as assistant chief on April 5, 1986. After retirement he worked at several different places, M&S Construction, Douglass Aircraft, 4th National Bank, St. Francis Hospital, Rogers County Jail, as the administrator, and finally as a RSU campus police officer. Along with his full-time employment he also had many part-time jobs, as most police officers do. John was a loving and ornery husband, father, grandfather, and great grandfather. He loved fishing, hunting, riding his tractor, attending his grandchildren's sporting events. John went out of his way to help as many people as possible as a police officer and he never met a stranger. His kindness was also given to animals, he loved them all. John and Shirley are members of New Life Baptist Church in Verdigris and he enjoyed visiting with his church family. Among the family members that he left behind include his wife Shirley Akin; his children Tammy Kapchinsky and husband Monty, and Cary Akin and wife Alicia; his grandchildren, Brittany Jones and husband Joe, of Indiana, Heather Gill, Grant and Evan Akin all of Claremore; great grandson Jacob Jones also of Indiana; his sister Shirley Thomas and husband Charles of Claremore; sisters and brothers in law Betty Carano and husband Johnny of Richardson, Texas, Margaret Ryan and husband Pat of Woodbridge, Virginia, Linda Ross and husband Bob of Bixby, Glinda Andrews and husband Andy of Claremore, Debbie McDonald and husband Harold of Vinita, Roy Sumter and wife Brenda of Claremore and a host of nieces and nephews. John was preceded in death by his father John Akin, mother Elarie (Taylor) Akin, stepfather Jack Cook, half-brother Buddy Cook, and half-sister Janie Cook. Those who wish to honor John with a memorial contribution may do so by contributing to either Alzheimer's Association, 2448 East 81st Street, Suite 3000, Tulsa, Oklahoma 74137 or Clarehouse, 7617 South Mingo Road, Tulsa, Oklahoma 74133.

Service for John Anderson Akin will be 10:00 a.m., Thursday, September 3, 2020 at New Life Baptist Church, burial will follow at Oakhaven Memorial Gardens. Friends may visit at the funeral home on Wednesday, September 2 from 1pm-8pm, with... View Obituary & Service Information

The family of John Anderson Akin created this Life Tributes page to make it easy to share your memories.

Send flowers to the Akin family.