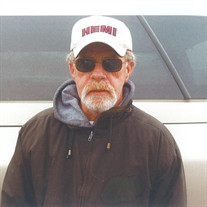 Funeral service for John Robert McDougal will be held on Thursday, October 14, 2021 at the MMS-Payne Funeral Home Chapel. Burial will follow at Wards Grove Cemetery. John McDougal passed away on Sunday, October 10th, 2021 at the age of 73. The son of Robert Lee and Irene Threlkeld McDougal was born June 30, 1948 in San Francisco, California. He was raised in Palo Alto, California. There he would attend Cubberley High School graduating in 1967. From a young age John had a passion for race cars. He loved hanging out at the Fremont racetrack with his 1958 Chevy Impala Convertible. One weekend, John was set up on a blind date with Janice Kight. They eventually would begin dating. Then in 1968 John was drafted into the United States Army. On December 27, 1968 while home on leave from basic training, he married Janice. A few days later John shipped out to the demilitarized zone of Korea. After completing his service he was discharged, and returned home to California. John and Janice would move to San Jose. There John began working for United Parcel Service. In 1988, he took a job working for Stanford Linear Accelerator Center (SLAC), as an Accelerator Research Surveyor. He would retire from there in 2013, and move to Clearlake, California. In 2018, John and Janice decided to give Oklahoma living another try. They had once lived in Blocker where they owned and operated Jan's grocery store. This time they settled in the Claremore area with 3 acres and his John Deere tracker. Over the years, John had many hobbies and pastimes that he enjoyed. From race cars, and car shows, to water skiing into his 60's. John loved animals and was known to adopt just about every one that came to his house. Then at night when it was time to relax, a nice western movie was always a great way, and it was even better if it was Gunsmoke. He is preceded in death by his parents, Robert and Irene Threlkeld McDougal; brother, Thomas Lee McDougal, and sister, Carol Blankenship. Survivors include his wife Janice McDougal; daughter, Julie Eisenhauer and husband Bruce; sons, John "J.T." McDougal, and Jacob McDougal and wife Danelle; grandchildren, Jordyn McDougal, Ben Eisenhauer, Emma Eisenhauer, Caleb McDougal, Peyton McDougal and Taylor McDougal; sisters, Robbie Jones, Twyla Baughman, Gloria Fowler, Portia Smith, and his twin Irene Jacobi along with many nieces and nephews. View and sign John McDougal's online memorial at www.mmsfuneralhomes.com

Funeral service for John Robert McDougal will be held on Thursday, October 14, 2021 at the MMS-Payne Funeral Home Chapel. Burial will follow at Wards Grove Cemetery. John McDougal passed away on Sunday, October 10th, 2021 at the age of... View Obituary & Service Information

The family of John Robert McDougal created this Life Tributes page to make it easy to share your memories.

Funeral service for John Robert McDougal will be held on Thursday,...

Send flowers to the McDougal family.