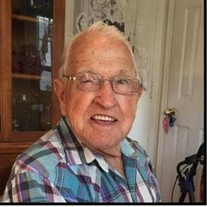 John Alfred (Jay) Metzger, 89, died Monday afternoon, January 25th 2021, at Saint Francis Hospital in Tulsa with loved ones by his side. He was born March 6, 1931 in Broken Arrow, OK, the son of Myrtle Elizabeth (Summers) Metzger and Paul Roosevelt Metzger. He graduated Broken Arrow High School with honors and then attended Oklahoma A&M. He started Metzger Custom Homes in the early 60’s and was a successful builder until he retired in 2016. Jay resided in Broken Arrow then moved his family to Wagoner in 1969. He left Wagoner in 1983 and returned to his home town until he married Roberta in 2004 and moved to Inola. If you knew Jay, you know that he was a very hard worker. He loved his work and he took pride in supporting his family and did it well. He loved to travel the United States and Canada. In the 1980’s it was his goal to visit every state and he almost accomplished his goal by visiting 45 of them. As his health declined and he was forced to stop working Jay spent all of his time with his loving wife, companion and best friend Roberta. He loved to go with her wherever she wanted to go whether it was a family event, Senior Citizens or to a doctor’s appointment – Jay always had his beautiful wife at his side. Surviving family members include his children Toni Huddleston (companion JD) of Skiatook, Bill Metzger (companion Mary) of Broken Arrow, Debbie White of Owasso and his son-in-law Kenny White, 3 grandchildren Eric White, Robert Goodman (wife Nancy), and Cindy Goodman-Jenkins (husband Robert). His siblings: Ellen Walker of Bixby, Ray Metzger (wife Dee) of Muskogee, Ron Metzger of Pensacola and Ricky Metzger of Broken Arrow. He had 3 great grandchildren, many nieces and nephews and a host of friends. Preceded in death was his loving wife Roberta (only 2 days before his passing), former wife Glenna Metzger, his mother, his father, and brother-in-law Wayne Walker.

John Alfred (Jay) Metzger, 89, died Monday afternoon, January 25th 2021, at Saint Francis Hospital in Tulsa with loved ones by his side. He was born March 6, 1931 in Broken Arrow, OK, the son of Myrtle Elizabeth (Summers) Metzger and Paul Roosevelt... View Obituary & Service Information

The family of John Alfred Metzger created this Life Tributes page to make it easy to share your memories.

Send flowers to the Metzger family.