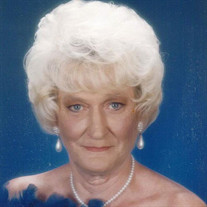 Funeral service for Joyce LaVone Tidwell will be 2:00 p.m. Friday, February 18, 2022, at Owalla Baptist Church. Burial will follow at Owalla Cemetery. Visitation will be on Thursday, February 17, 2022 at MMS-Payne Funeral Home in Claremore from 1-7 p.m. Family will greet friends from 5-7 p.m. Joyce passed away on Saturday, February 12, 2022. She was 76 years old. Joyce was born on August 17, 1945, to Charles Leroy (Roy) Hutchinson and Bessie Delores (Kendell) Hutchinson in Cherokee, Oklahoma. She attended Cherokee schools and the Mission Church. Joyce married Floyd William (Cowboy) Parmley in Enid, Oklahoma on July 1, 1962. They moved to Alva, Oklahoma and started a family. When the girls were young she worked some as a waittress, but then was a full-time stay at home Mom until her son started attending school. Then she worked alongside her husband in the tile and marble business. She attended the Nazarene Church in Alva, where she and her family enjoyed singing for the Lord. Joyce and her family moved to California for two years, then she and her children moved back to Oklahoma when she and Floyd divorced. In 1984, she moved to Jackson, Tennessee, where she met James Tidwell. They were married on November 9, 1986. She stayed married, but moved back to Claremore in 1989. She became a member of the Owalla Road Baptist Church, where she attended until illness prohibited. She was baptized at Owalla Baptist. Joyce loved to sing country and gospel music. She was an avid contributor to St. Judes Childrens Research Hospital, Shriners Hospitals for Children, and Wounded Warriors. She was also a member of A.B.A.T.E. Joyce was preceded in death by her parents, Charles (Roy) and Bessie Hutchinson, brothers Gilbert Jackson (Jack) Hutchinson, and Charles Ray (Charlie) Hutchinson; sisters Betty June Munsell and Barbara Ann Hawley; husbands Floyd (Cowboy) Parmley and James William Tidwell; niece Audra Palmer; and nephews Danny Paul Palmer, Shannon Wayne Hutchinson, and Gary Lynn Munsell. Joyce is survived by her sister Linda Kay Roller of Enid, OK; her daughters Connie Sue Parmley Rhoades of Kinsley, KS, and LaLonna Jo Parmley of Claremore, OK; her son James William Parmley and wife Pamela of Claremore, OK; fourteen grandchildren; thirty-eight great-grandchildren; and nine great-great-grandchildren; as well as many nieces and nephews.

The family of Joyce LaVone Tidwell created this Life Tributes page to make it easy to share your memories.

Funeral service for Joyce LaVone Tidwell will be 2:00 p.m. Friday,...

Send flowers to the Tidwell family.