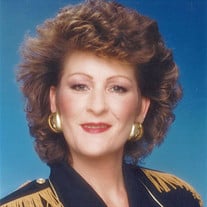 Service for Juanita Sue "Nita" Deerinwater will be 10:00 a.m., Wednesday, February 19, 2020 at Inola River Of Life Assembly Of God Church; burial will follow at Highland Cemetery under the direction of Inola Funeral Home & Crematory. Friends may visit at the funeral home on Tuesday, February 18, from 4pm-8pm. Nita passed away on Friday, February 14, 2020. She was 66. Born December 21, 1953 in Inola, Oklahoma to Elmer Applegate, Jr. and Barbara (McCallister) Applegate, Nita attended schools in Inola. Following her schooling, she married Marshall Lee Deerinwater, and the couple made their home in Inola through the years. Nita worked as a waitress at a local restaurant, and later became the manager. She also became a cosmetologist and owned her own shop, Nita's. She studied and passed her boards to get her real estate license, and sold homes for many years. There wasn't much that Nita couldn't do. She enjoyed fishing, camping, and traveling with her husband and family, and always looked her best when she left her home. Nita love to give and she supported many charities that gave to children in need. Her heart was her family and she loved being with them. Those family members that survive include her husband of 50 years, Marshall Deerinwater; her son Eric B. Deerinwater and wife Amy; her mother Barbara Applegate; her grandchildren Stephen Lee Deerinwater, Joshua Clinton Deerinwater, Tristen Noah Deerinwater, Adrian Ellis, Jesse Hamilton, and Josey Hamilton; and her brother Ted Applegate. Nita was preceded in death by her father Elmer Applegate, Jr. and her sister JoAnn Lamont.

The family of Juanita S. "Nita" Deerinwater created this Life Tributes page to make it easy to share your memories.

Send flowers to the Deerinwater family.