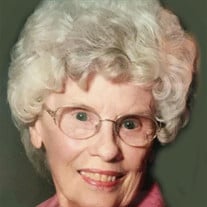 Funeral service for Chelsea resident, Kathryn Lavern Gulley will be at 2 pm Thursday, February 27, 2020 at Chelsea First Baptist Church. Burial will follow in Chelsea cemetery. Visitation will be at Chelsea Funeral Home on Wednesday, February 26, 2020 from 1-8 pm. Family will receive friends from 6-8 pm.  Kathryn passed away at Hillcrest Hospital in Tulsa on Saturday, February 22, 2020. She was 83 years old.  Kathryn was the daughter of Carl and Trudie Mae (Smith) Todd, born on February 2, 1937 in Ellsinor, Missouri. She attended Jay Schools in Northeast Oklahoma, graduating with the class of 1954.  After graduating, Kathryn began her working career. It was while working at Petroleum Trading and Transport that she met Helen (Gulley) Morgan. Unbeknownst to her, she would become her future sister in-law. This friendship would lead to her being introduced to Carl (Buck) Gulley. The two began dating and married on April 21, 1955. They lived in a few different places during the early years of their marriage including Stigler, Tulsa, and Locust Grove. Finally they settled in Chelsea in 1976. Kathryn was an avid homemaker until helping her husband open a gun shop called the 89er Gun Shop in Chelsea. After the gun shop closed, she worked for Dr. Ken Hoodenpyle at the local veterinary office in Chelsea, retiring in the late 1990’s.  Her greatest love was her grandchildren and great-grandchildren. She also found many activities to occupy her time. She taught children’s Sunday school in Chelsea and Foyil. She also loved shopping, gardening, canning, and cooking... especially peanut butter pie! Her house was always immaculate, she made a habit of naming all of her cattle, and her favorite color was pink. Though she was little in stature, she was fierce in life.  Kathryn was preceded in death by her husband Carl Gulley, her daughter Carla Kay Gulley, her daughter Stacey Deanna Mack and siblings Joe Todd, Donald Bissing, and Joy Roberts.  Surviving family members are her daughter Tammy Sabharwall and husband Victor, grandchildren Jason Sabharwall and wife Amber, Amy Hughes and husband Clint, Jessica Shrum and husband Justin, Kyle Mack and Kelby Mack; great grandchildren Joshua and Kaylee Sabharwall, Hayley, Isaac, and Adalyn Hughes, Wyatt, Grace, and Jackson Shrum, and Bryce Mack.  View and sign Kathryn’s online memorial at www.mmsfuneralhomes.com.

The family of Kathryn Gulley created this Life Tributes page to make it easy to share your memories.

Send flowers to the Gulley family.