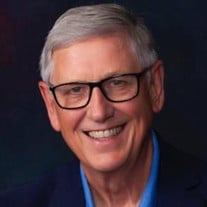 Keith Edward Ballard, 72, of Claremore, was born July 23, 1949, in Hardtner, Kan., to Bill and Norma (Gates) Ballard. His formative years were shaped by hard work and love of family, especially the relationships he had with his brother, Joe, and sister, Connie, as well as cousins, grandparents, aunts and uncles. Never one to shy away from hard work, Ballard delivered newspapers and mowed lawns as a young boy, and later put in many years of farm labor as a teenager and young adult. Ballard funded his college education working in the dormitory cafeteria, hauling hay, and doing farm work. His first job as a college graduate was as a freight delivery driver in the back alleys of Stillwater, and even during his first years as a superintendent, he returned annually to his wife’s family’s farm in Jet, Okla., to drive a combine and help with the wheat harvest. The value of education was instilled in Ballard by his parents, and he was always determined to complete a college degree. From his mother he inherited a love for reading, earning a reputation for having his name on almost every book checkout card in the local library. A multiple-sport high school athlete, he loved reminiscing about the undefeated Kiowa football team of 1966 and qualifying for the state track meet in the half-mile. Throughout his life, Ballard consistently credited his success to the community, teachers, and classmates in his small-town upbringing in Kiowa, Kan., especially his beloved Kiowa class of 1967. Following high school, Ballard attended Fort Hays State University, where he double-majored in Speech and Psychology, and was elected senior class president. Ballard would later earn a master's degree from Northwestern Oklahoma State University, and his doctorate in education from Oklahoma State University. The son of a school janitor and a nurse’s aide, who ultimately went on to lead the second-largest school district in Oklahoma, Ballard was a firm believer in the transformative power of public education. He dedicated his professional life to striving toward exceptional and equitable learning opportunities for generations of Oklahoma students. Over the course of his career, he served as a teacher at Coweta Public Schools; a teacher, administrator, and superintendent at Oologah-Talala Public Schools; superintendent of Claremore Public Schools; Executive Director of the Oklahoma State School Boards Association; and superintendent of Tulsa Public Schools. Most recently, he served as the George Kaiser Family Foundation Endowed Chair in Educational Leadership in the Jeannine Rainbolt College of Education at the University of Oklahoma’s Tulsa campus. He received numerous accolades for his professional and public service. Among these were being named the Oklahoma Superintendent of the Year, selection for the Oklahoma Education Hall of Fame, the 2020 Tulsa Regional Chamber Lifetime Achievement Award, the Oklahoma Association of School Administrators Lifetime Achievement Award, the Silver Beaver Award from the Boy Scouts of America, Tulsa People Magazine’s Tulsan of the Year, the Alumni Achievement Award from Fort Hays State University, and resolutions recognizing his meritorious service by both the Oklahoma House of Representatives and Oklahoma Senate. As proud as he was of his professional accomplishments, Ballard cherished his family above all. In 1967 he met the love of his life, Christie Castle, at a WKY teen hop in Kiowa. They married on August 6, 1971 and celebrated 50 years of marriage this year. Ballard was heavily involved in the lives of his three children, including coaching their youth teams in soccer, basketball, and baseball. His family influence extended well beyond his three children. Holidays and vacations frequently included nieces, nephews, and in-laws. Ballard was like a father or brother figure to many in his extended family. His love of family only blossomed as he welcomed ten grandchildren and served as their greatest cheerleader in their many activities. Ballard adored holidays and tradition and was especially proud of his Christmas light displays, his flower and tomato cultivation, and his self-declared “world champion” pancakes. He was known for his optimism, enthusiasm and love of people. Ballard was a champion for all those around him and touched the lives of countless students, educators, and family members, including mentoring educational leaders throughout Oklahoma and across the country. There was never a more fierce advocate for public schools and the children of Oklahoma. Ballard was preceded in death by his parents; his brother, Joe Ballard; his sister, Connie Schwartz; his mother and father-in-law, L.E. and Joan Castle; and brother-in-law Jeff Miller. In addition to his wife, he leaves as his legacy three children, their spouses, and ten grandchildren: Matt and Traci Ballard and their children Kizer, Keaton, and Matthijs; Michelle and Michael Sagely and their children, Ashton Andrews, and Allison, Emma, Olivia Sagely, all of Claremore; and Michael and Fanny Ballard and their children Astrid, Henry, and Björn, of Örebro, Sweden; as well as a host of cherished extended family. In lieu of flowers, the family suggests donations to the Claremore Public Schools Foundation, the Tulsa Public Schools Foundation, the Claremore First United Church Children’s Center Fund, or the public-school foundation of your choice. Funeral service for Keith will be 10:00 a.m., Saturday, October 2, 2021 at First Baptist Church, burial will be 4:00 p.m., at Pleasant View Cemetery in Jet, Okla. Friends may visit at the funeral home on Friday, October 1, from 2pm-8pm, with family receiving visitors from 5pm-6pm. Keith passed away on Tuesday, September 28, 2021.

Keith Edward Ballard, 72, of Claremore, was born July 23, 1949, in Hardtner, Kan., to Bill and Norma (Gates) Ballard. His formative years were shaped by hard work and love of family, especially the relationships he had with his brother, Joe,... View Obituary & Service Information

The family of Keith Edward Ballard created this Life Tributes page to make it easy to share your memories.

Send flowers to the Ballard family.