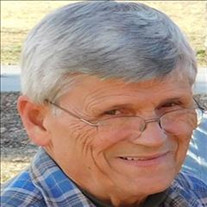 Kenneth (I'm Ken to everybody) Pierce, 74, went home peacefully to be with his Lord, Friday, April 17, 2020, surrounded by his family in Inola, Oklahoma. Ken was born on March 25, 1946, in Wichita, Kansas, and was the only child of Dale and Juanita Pierce. Ken grew up in Kansas and graduated from Augusta High School in 1964. He then attended Baker University in Baldwin, Kansas after being awarded a football scholarship. After college, he enlisted in the United States Navy, specializing in Airborne Sonar, and was later awarded the National Defense Service Medal. He then moved to Dallas, Texas and worked at Texas Instruments for several years, before obtaining his certification to become a Court Reporter. Ken was a Court Reporter for many years in Okemah, McAlester, and Tulsa, Oklahoma, working for Judge Miracle in Okfuskee County and Judges Wesley Brown and Steven Taylor in Pittsburg County. He also served as President of the Oklahoma Shorthand Court Reporters Association. He also was a salesman for a short while before starting Pierce Pools in Tulsa, Oklahoma. Ken enjoyed his work. He was a hard worker and was very passionate about what he did. Ken loved the Lord Jesus Christ and accepted him as his personal Savior in 1979. He was actively involved in the High School ministry and taught Sunday School at First Baptist Church and Lakewood Christian Church in McAlester for many years. Anyone who knew Ken, knew how much he loved and how proud he was of his family. He also loved gardening, fishing, sports, racing and in his spare time, remodeling his house. Ken is survived by his loving wife, Karla Pierce of Inola, Oklahoma; daughter, Heather Gray and her husband Gary and their two children, Hayden and Caysi, of Skiatook, Oklahoma; son, Michael Pierce and his wife Wendy and their three children, Hailey, Hadley and Holden, of Mustang, Oklahoma; and daughter, Lindsey Lofton and her husband Quinton and three children, Tyler, Katie and Leah, of Catoosa, Oklahoma. In lieu of flowers, the family asks that donations be made in Ken's honor to the St. Jude Children's Hospital or Oklahoma Firefighters Burn Camp (https://www.okffburncamp.com) A memorial service with full military honors will be held at a later date

Kenneth (I'm Ken to everybody) Pierce, 74, went home peacefully to be with his Lord, Friday, April 17, 2020, surrounded by his family in Inola, Oklahoma. Ken was born on March 25, 1946, in Wichita, Kansas, and was the only child of Dale and... View Obituary & Service Information

The family of Kenneth Pierce created this Life Tributes page to make it easy to share your memories.

Send flowers to the Pierce family.