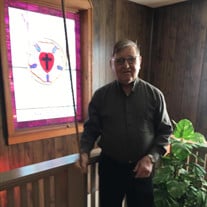 Lambert William Peper of Adair, Oklahoma, went to his eternal home on Sunday, June 21, 2020. He was 86 years old. He was born February 24, 1934, in Adair, Oklahoma to George E. Peper and Lydia (Ruppel) Peper. He was one of 8 children. As a young boy he and his siblings helped out on the family farm. Lambert attended school at Bethlehem Lutheran School. He was confirmed in faith at Bethlehem Lutheran Church on March 21, 1948. He served in the army where he earned his high school degree. On October 5, 1963, he married Emma Lou Oney. The couple made their home near Adair. Together, Lambert and Emma Lou managed their farm and enjoyed raising their three children there. Lambert was an avid cattle rancher most of his life. He built many ponds around the area. He operated dozers and scrapers for Dixie Contractors building the Verdigris River Channel for 6 years. Then he worked at Peabody Coal Company for 21 years as a heavy equipment operator and retired from there in 1991. He worked part time on his brother E.C.’s ranch for several years. He retired from cattle ranching 6 years ago. Lambert was an active member at Bethlehem Lutheran Church and served many positions on the church committee including elder and trustee. He also enjoyed his duty of being the bell ringer each Sunday morning to begin worship service. Lambert was a very dedicated family man. As a father it was very important to him that he raised his family in the Christian faith. He enjoyed any time he could spend with his family. He loved to do chores around the farm with his children and later his grandchildren. He planned many memorable family vacations as he raised his family. He continued to go on family vacations with his adult children and their families. He looked forward to our Sunday family lunches following church service each week. He was very proud of his family. His many grandchildren were his pride and joy. He was known as a faithful Christian hard worker who had a kind heart and a sense of humor that people enjoyed. Lambert is survived by his wife, Emma Lou Peper; his children Tammy Hill and her husband Mike of Adair, Todd Peper of Claremore, Julie Holt and her husband Brad of Adair; his grandchildren Tamara Keathley and her husband Zach, Shelby Sweet and her husband Alex, Shante Aubert and her husband Trey, Michael Hill, Jacob Lee, Amanda Peper, Steven Holt, and Kristen Holt; his great-grandchildren Sage Aubert and Emmett Sweet; his siblings George Peper of Chelsea, Art Peper of Adair, Ewald (E.C.) Peper and his wife Shirley of Adair, Arlene Hugley and her husband George of Adair, Don Peper and his wife Janana of Adair, Jane Harding and her husband Fred of Adair. He was an uncle and great uncle to many nieces and nephews. Lambert is preceded in death by his parents, George and Lydia Peper, and his brother Gary Peper.

Lambert William Peper of Adair, Oklahoma, went to his eternal home on Sunday, June 21, 2020. He was 86 years old. He was born February 24, 1934, in Adair, Oklahoma to George E. Peper and Lydia (Ruppel) Peper. He was one of 8 children.... View Obituary & Service Information

The family of Lambert William Peper created this Life Tributes page to make it easy to share your memories.

Lambert William Peper of Adair, Oklahoma, went to his eternal...

Send flowers to the Peper family.