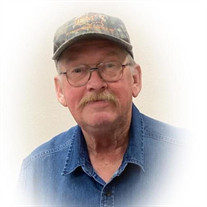 A visitation for Larry Anderson will be held on Friday, July 17, 2020 at the MMS-Payne Funeral Home in Claremore from 6-8 p.m. Family will greet friends during this time. Larry Don Anderson passed away on July 10, 2020 at the age of 73. The son of Edith Kilpatrick Anderson was born June 15, 1947 in Alameda, California. As a young child Larry and his mother moved to Oklahoma, settling in Oklahoma City. There he would spend his childhood years. He would eventually make his way to Harding High School in Oklahoma City. There he would graduate with the class of 1965. It was also there that he would meet Jessica Ellis. They would marry and have two children Andy, and Jennifer. The next few years would take Larry to Biloxi, Mississippi for his training in the Air National Guard. When his training was completed he moved to Tulsa, Oklahoma. There he began working for Bell Telephone as a lineman. He retired from ATT in 2001 as a Radio Communication operator. After retirement Larry began focusing more on the things that he enjoyed the most. Larry was an avid motorcycle fan. He not only enjoyed watching them race on tv, he enjoyed racing them himself. Over the years he enjoyed racing enduro, flat track and of course his favorite drag racing. He was also an active member of the Pro Motorcycle Racing Association. Another favorite past time for Larry was wood working. He had became pretty good at building things; however he had dedicated himself to the art of wood turning. This art lead him to joining the Northeast Oklahoma Wood Turners Club. Other hobbies he enjoyed included watching movies, shooting guns, and going out to dinner. He is preceded in death by his mother, Edith Anderson, and aunts, Louise, and Rayna. Survivors include his son Andy Anderson and fiance Anita Foster of Loveland, Colorado; daughter, Jennifer Moffitt and husband Ernest of Broken Arrow, and his grandchildren, Drake Moffitt and wife Sydney, and Jener and Philp Moffitt. View and sign Larry's online memorial at www.mmsfuneralhomes.com

A visitation for Larry Anderson will be held on Friday, July 17, 2020 at the MMS-Payne Funeral Home in Claremore from 6-8 p.m. Family will greet friends during this time. Larry Don Anderson passed away on July 10, 2020 at the age of 73. The... View Obituary & Service Information

The family of Larry Don Anderson created this Life Tributes page to make it easy to share your memories.

A visitation for Larry Anderson will be held on Friday, July...

Send flowers to the Anderson family.