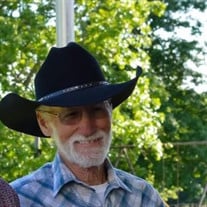 Graveside service for Larry Howard Childers will be 11:00 a.m. Wednesday, November 17, 2021, at Hickory Grove Cemetery in Grove, Oklahoma. Visitation will be 1-8 p.m. Tuesday, November 16, 2021, family will greet friends from 6-8 p.m, at MMS-Payne Funeral Home in Claremore.  Larry passed away in Tulsa on Friday, November 12, 2021. He was 80 years old.    The son of Joseph Henry and Esther Charity (Lynch) Childers was born in Elaine, Arkansas on December 13, 1940. He spent his entire career in RV sales and service.  He met the love of his life, Anita Slavens in Afton. The two were married in Miami on April 4, 1984. The couple lived in Miami for a short time, where they would open Childers RV, where he bought, sold, traded, and built RV's.  Eventually Larry and Anita moved to the Claremore area, where Larry worked for Vogue Coach, Dave's RV then eventually retired from Route 66 RV after 15+ years.     In his spare time, Larry enjoyed fishing, sitting around the fire pit, and spending time with his kids and grandkids.    Larry was preceded in death by his parents, three brothers, and one granddaughter.    Survivors include his wife Anita; children, Brooke Green and husband Jeff,  Matthew Childers and wife Amanda, Gene Childers and wife Jane, Joey Childers and Casy,  Alan Childers and Tonya Dickson; three brothers; five sisters; fifteen grandchildren, and numerous great-grandchildren and extended family and friends.

The family of Larry Howard Childers created this Life Tributes page to make it easy to share your memories.

Graveside service for Larry Howard Childers will be 11:00 a.m....

Send flowers to the Childers family.