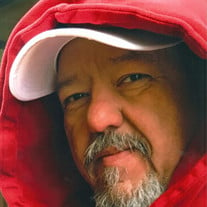 Funeral service for Lawrence David "Bumper" Hale, II, will be held at 10:00 a.m., Monday, February 21, 2022 at First United Methodist Church, burial will follow at Double Springs Cemetery in Tahlequah. Visitation will be held at MMS-Payne Funeral Home on Sunday, February 20th from 1pm-6pm, with family receiving visitors from 4pm-6pm. David passed away on Tuesday, February 15, 2022 at the age of 55. Born August 15, 1966 in Tulsa, Oklahoma to Lawrence David and Idalene (Gritts) Hale, David went to school in Claremore and graduated with the class of 1984. He grew up with his four siblings playing and loving sports. After graduation, he continued his education by attending Okmulgee Technical School. David worked for Bosco Fasteners and the Cherokee Nation before he built his own business, Hale Bail Bonds. He met the love of his life, Lesli Dianne Carlile, and they married on June 24, 2006 and began building their life in Catoosa, OK. That same year, he took on the important role of stepfather to Austin, and in 2007 he became a father of two when his son Trey was born. David played many important roles in his lifetime. A brother to so many, a friend to everyone, an uncle to nine, a brother by blood to four, a dad to two, and a husband to one. He was the life of the party and brought a huge smile to everyone he met.  His life was spent making a good time out of every situation. As an avid sports fan, there was always a game or match of some kind to be watched. He loved his Oklahoma Sooners and Dallas Cowboys but would watch any kind of sport that was on television.  He was a skilled billiards player and loved to play dominoes. But his real love was his family. He loved to travel and always found adventure for Dianne, Trey, Austin, and his nieces and nephews. He was his family’s biggest fan and source of constant support because he was always found rooting for his family at school functions, little league games, and whatever sport was on the family agenda. If there was a competition, David was there and he was never one to shy away from a wager, which he usually won.  He is survived by his wife and children, Dianne Hale, Lawrence David “Trey” Hale III, Austin Blower and partner Bobby Nottingham; his father, Lawrence David Hale; his mother-in-law, Wanda Rountree; his four siblings, Amanda Hardwick and husband Gary, Jonna Anderson and husband Jody, John Hale, and Jeff Hale and partner Tricia; his nieces and nephews, Nathan Anderson and wife Sally, Amelya Wilmott and husband Matt, Alexandra Hardwick, Haley Hardwick, Julia Hale, Max Hale, Case Carlile, Ayden Carlile, and Elena Hale; his great nephew and niece, Jack Wilmott and Zoe Anderson; and his brother and sister-in-law, Beau and Tammy Carlile. He was preceded in death by his mother, Idalene Hale and his sister, Jennifer Hale. David, or affectionately known as “Bumper”, will be remembered for the smile that walked into a room, his calm and steady demeanor, being an all-around genuine good guy, and a generous heart.

The family of Lawrence David "Bumper" Hale II created this Life Tributes page to make it easy to share your memories.

Funeral service for Lawrence David &quot;Bumper&quot; Hale, II, will be...

Send flowers to the Hale family.