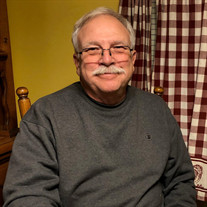 Lee Allan Pascoe passed away on September 30th, 2020 at his home with family by his side. He was 69 years old. Lee was born to Lyle and Betty Pascoe on April 7th, 1951 in Niles, Michigan where he spent the first part of his childhood. He later spent some time in California exploring and growing. As a young man he joined the Navy, which gave him the opportunity to travel the world. During his time serving his country he was able to visit places like The Philippines, Japan, and off the coast of Vietnam while he was on board the U.S.S. Jason.  After his time in the Navy, he returned to Michigan, where he started a family. He welcomed two daughters, Lynn and Melissa.  Later he moved to Oklahoma to attend Spartan School of Aeronautics, where he specialized in electronics. It was in Oklahoma that he met and married his wife Marilyn Pascoe. After graduating from Spartan in 1983, he entered the work force at American Airlines as a mechanic. He later became an inspector at American, where he retired after twenty-four years of service.  Lee loved to share his knowledge with everyone and volunteered in many ways. He coached girls softball, he was a volunteer firefighter, and he made handmade knives to donate for the youth fundraisers at church.  Lee also obtained his private pilot license. Lee had many hobbies. He loved to work on anything and everything. His family called him a Master Mechanic. He loved spending time in his garage working on his vintage truck. He enjoyed tractors, model trains, remote control airplanes, and sail boats. He also had a love of cartoons. Lee was a licensed Ham Radio operator. His call sign was N5SGO.  Lee would say it as “November 5 Sierra Golf Oscar”.  Lee enjoyed spending time with his wife Marilyn at their lake property where they hosted family, friends, campers, fishermen, kayakers, dogs, Purple Martins, and lots of hummingbirds.   Lee is preceded in death by his parents Lyle and Betty Pascoe.  Lee is survived by his wife of 30 years, Marilyn Pascoe of Catoosa OK, daughters Lynn Rains and husband J.D. of Sherwood, AR, and Melissa Pascoe of Coloma, MI, step-daughters Trisha Melhouse and husband Mark of Muskogee, OK, Nancy Phariss and husband Jason of Claremore, OK, Mary Rodriguez of San Leon, TX, and Renee Rodriguez of Oklahoma City, OK, 11 grandchildren, and one great- granddaughter.

Lee Allan Pascoe passed away on September 30th, 2020 at his home with family by his side. He was 69 years old. Lee was born to Lyle and Betty Pascoe on April 7th, 1951 in Niles, Michigan where he spent the first part of his childhood. He later... View Obituary & Service Information

Please join us on our Facebook Page at 3:00 p.m. for the livestream of Lee Pascoe's Service.

Send flowers to the Pascoe family.