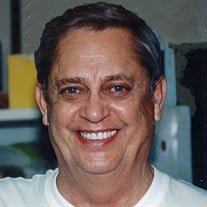 Graveside service for Leon Edward Abbott will be 10:00 a.m., Friday, August 2, 2019 at Beggs Cemetery, in Beggs, Oklahoma. Friends may visit at MMS-Payne Funeral Home in Claremore, on Thursday, August 1, from 1pm-8pm, with family receiving visitors from 6pm-8pm. Leon passed away on Friday, July 26, 2019. He was 86. Born on February 3, 1933 in Craig County, to Herman and Bonnie (Poe) Abbott, Leon attended schools in Vinita. He enlisted with the U.S. Army and served his country in the 45th Infantry, during the Korean War. Following his honorable discharge, Leon returned to Vinita and began a career with Western Electric. An avid fisherman, Leon enjoyed finding the best spot on the lake to catch a mess of crappie. He was a loyal Sooner fan and made sure he didn't miss watching a game. Leon was also kept up with the St. Louis Cardinals Baseball. You could find him most days at the Senior Citizens Center visiting with all of his friends. Leon traveled with Sue, through the years and together were able to see many places in the states. Those family members that survive include his life partner Sue Webb and her family, the Harrelsons; his children Debi Ramm and husband Robert of Claremore and Larry Abbott and wife Doreen of Colleyville, Texas; his grandchildren Selena Marlatt and husband Aaron, Alyssa Blevins husband Jesse, Cale Abbott and Miles Abbott; 5 great grandchildren; his sister Thelma Sawyer and husband Gene, and many nieces and nephews. Leon was preceded in death by his parents, siblings Carl Abbott, Richard Abbott, and Glynda Rose Abbott.

The family of Leon Edward Abbott created this Life Tributes page to make it easy to share your memories.

Send flowers to the Abbott family.