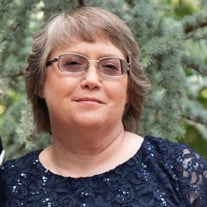 Lisa Fern (Cicio) Lewis was born Jan 23,1968, Atoka, Oklahoma to John and Nona Fern (Crist) Cicio, baby no 1 of a set of very unexpected identical twin girls. A fact she never let anyone forget. She was first!! Lisa grew up on the farm north of Lehigh as the siblings before her did, playing jokes on people with her twin, making them guess who was who? an activity which lasted right up until her death.   Lisa also was very active in school clubs during this time, and hanging with her friends, Shelley, Sandra, Christina, Theresa, and many more.  Lots of fun was had by all, They were always together. One of the favorite activities was sneaking off to Circle N for a pizza pocket and Dr. Pepper during class. Lisa graduated from Coalgate High School in May  1986 and attended SOSU and NEOSU for two years after high school. Lisa and Cecil met in the most unexpected place, a crowded Walmart Christmas 1985.  They became inseparable, and married in july 1986, Hillcrest Baptist Church, Atoka, Oklahoma.  Bro. Dennis Garner and Bro. John Howard officiated the ceremony. Cecil started his teaching career after their marriage, and shortly they moved to NE Oklahoma, where they have resided to this day.  Lisa and Cecil chaperoned many student trips and activities over the years, traveling across our great nation with kids and enjoying every minute of it.  While they were getting settled, Lisa graduated from Tulsa Junior College or now known as Tulsa Community college in may 1991 with her associates degree in billing/coding.  Lisa worked several years for tulsa ob/gyn and various other clinics around Tulsa and Claremore.  Lisa and Cecil built their home with a lot of sweat equity in 1992 all the while serving God, community, and family The Lewis jrs soon welcomed a son, Cameron Ryan Lewis, to the family, and a while later, a daughter, Cathryn Leigh Lewis.  Cameron helped expand their little family by marrying Tiffany Steelmon. Lisa and Cecil spent their lives like many young couples, raising kids, chasing kids, etc. serving God and community and trying to have a little fun in between.  They instilled a deep purpose of faith, family and love in their children, which is very evident to all who know them. During this time, Lisa found a new calling in life, paramedicine.  She attended Rogers State College in Claremore where she received her associates in paramedicine.  Lisa loved her work, her caring and compassionate nature coming through while working as a paramedic.  However, an injury forced Lisa to retire from her beloved paramedic job but that didn't stop her from supporting her coworkers and friends made during this time.  She was able to be a full time mom for a while before her passing which everyone enjoyed.  She was always there to help if called, and if she couldn't get there, she prayed you out of the mess you were in. Lisa had many talents, photography, cooking, sewing, crocheting, and loving people. If you were blessed enough to receive a crocheted gift from Lisa, treasure it. Many hours of love and prayers went into them.  Every stitch was a prayer for the receiver. Lisa is preceded in death by her parents; Nona Fern (Crist) Cicio and John Cicio,     Grandparents; Alma and AW Renfro, CG and Lottie Crist, and Martin and Sophia Cicio Kozak, Brother;  Robert Cooper, Sister in law; Marjorie Cooper, Niece; Melissa Cooper, As well as several cousins, aunts, uncles, and friends too numerous to mention. She is survived by her husband Cecil R. Lewis, Jr, of the home, Son; Cameron Lewis, and wife Tiffany of Verdigris, Ok , Daughter; Cathryn Leigh Lewis, of the home, Granddogs; Thor, Rosie, and Riley, of Verdigris, OK Brothers; Roger Cooper, Locust Grove, Ok, Martin and Sue Cicio, Coalgate, Ok Brothers in love: Jim Bob and Amanda Lewis, Atoka, Ok; Robert and Brenda Rackley, Newalla, Ok Sisters;  Deloris and Don Hedgecock, Coalgate, OK; Johnna and David Rosenthal, Van Alstyne, TX Sisters in love:  Letha Guinn, Coalgate, Ok; Helen Cooper, Wagoner, Ok Parents in love; Cecil R. and Joyce Lewis, Atoka, Ok. Lisa has several nieces, nephews, cousins, aunts, uncles, and very close friends, near and far who survive her as well.  It is a blessing there is not enough paper in this world to list them.

Lisa Fern (Cicio) Lewis was born Jan 23,1968, Atoka, Oklahoma to John and Nona Fern (Crist) Cicio, baby no 1 of a set of very unexpected identical twin girls. A fact she never let anyone forget. She was first!! Lisa grew up on the farm north... View Obituary & Service Information

The family of Lisa Fern Lewis created this Life Tributes page to make it easy to share your memories.

Send flowers to the Lewis family.