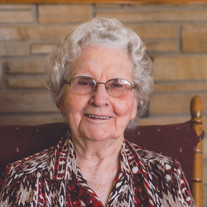 Funeral service for Chelsea resident, Lorene Fry will be 2:00 p.m. Tuesday, February 22, 2022, at Epworth United Methodist Church in Chelsea. Burial will follow at Chelsea Cemetery. Visitation will be at Chelsea Funeral Home and Cremation Service from 1-7 p.m. on Monday, February 21, 2022, with family greeting friends from 5-7 p.m. Lorene passed away Wednesday, February 16, 2022, at the age of 102. Lorene Emma (Sis) Most was born April 20, 1919, to John and Emma Caroline (Harrendorf) Most, in Chelsea, Oklahoma. She was the fourteenth child of fifteen. Lorene attended Chelsea Schools, and was the first of her siblings to receive a high school diploma. During high school, Lorene cleaned houses, and after graduation, she worked as a telephone operator at the Chelsea Telephone office. It was in Chelsea that she met the love of her life, Francis Eugene (Gene) Fry. Gene joined the Navy while he and Lorene were dating, and was stationed in Portland, Oregon. Gene missed Lorene so much that he sent for her so they could be married. Lorene took the train from Chelsea to Portland. She and Gene were married in Seattle, Washington on February 14, 1942. While living in Portland, Lorene worked at Montgomery Wards, until the Navy moved them to Gulfport, Mississippi, where Lorene worked at the Williamette Shipyard, while Gene was overseas during the war. After the war, Gene and Lorene moved back to Chelsea while Gene attended welding school. He later began a pipeline job, which took them to many places. During these years, two children were added to the family, Phyllis Ann (Pratt, Kansas) and James Darrell (Jim) (Springfield, Illinois). In 1953, Chelsea became the family's forever home. Lorene stayed at home and cared for her children while Gene worked to support the family. Phyllis grew up and went off to college, where she became a teacher, and also where she met the love of her life, Dave Kiger. Jim married and gave Lorene three grandchildren and four great-grandchildren. Lorene and Gene attended the Church of God in Alluwe, where she was the Sunday School Director. When not serving the church, Lorene enjoyed tending to her flowers and vegetable garden. She loved visiting with family, especially her many siblings, and her children, grandchildren, and great-grandchildren. Lorene is preceded in death by her parents and fourteen siblings, her husband Gene, son Jim Fry, grandson Nolan Fry, and son-in-law Dave Kiger. Survivors include her daughter Phyllis Kiger; daughter-in-law Sharon Fry; grandchildren Leslie Dawn Reichert and husband Fred, and Cammerann Carter Johnson and husband Tyler; and great-grandchildren Carly Jewel, Bode, and Legend Reichert, and Ainsley Grace Johnson; as well as numerous nieces, nephews, and extended family members. Memorial donations can be made to Clare House (Hospice) in Tulsa. View and sign Lorene's online memorial at www.mmsfuneralhomes.com.

The family of Lorene Emma Fry created this Life Tributes page to make it easy to share your memories.

Funeral service for Chelsea resident, Lorene Fry will be 2:00...

Send flowers to the Fry family.