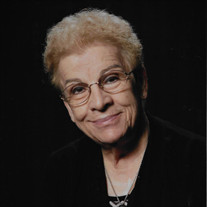 Loretta A. Genn passed away on Thursday, June 3, 2021 at her home in Claremore, Oklahoma. Loretta was born July 27, 1936 in Pawhuska, Oklahoma to Sie and Naomi (Forney) Enyart. As the middle of five, she truly enjoyed growing up in Pawhuska. She loved telling stories about her parents, Sie and Naomi, and of her siblings, Sie, Ninetta, Shirley, and Doris Jean., and their friends, especially Loretta Jane, and the many adventures involving all of them. She also shared many memories about family vacations, seeing lots of movies and putting on neighborhood shows. She had many pets including turtles, snakes, lizards, and even an alligator - but not the horse she really wanted. Loretta graduated Pawhuska High School in 1954 and remained close to her classmates throughout the years. She always helped organize an annual class reunion and made sure they committed to being there. Loretta met Luther Myers, Jr. at Falls Creek. They got married in 1953, and lived in Pawhuska where they had three daughters. They later divorced. Loretta then married Hollis Genn who was a Civil Engineer for Soil Conservation in Claremore. They moved from Pawhuska to Nowata and finally settled in Claremore where they both retired. Hollis passed away in 2003. During her varied career, Loretta spent many great years at the Bureau of Mines in Bartlesville, and later retired as Chief of Accounting at the Army Corp of Engineers in Tulsa. Loretta was proud that she went back to school and completed a degree in accounting while still working. Before, and especially after retirement, Loretta enjoyed traveling. She visited most of the US and over 26 countries, usually traveling with her youngest sister, Doris Jean. Also, many trips to Las Vegas with her sisters, Shirley and Ninetta. In addition to traveling, Loretta was involved in many professional, charitable, and community organizations. She was an active member and officer in several: Pawhuska Alumni, Toast Masters. Holiday Hills OHCE. Verdigris Valley Daughters of the American Revolution in Claremore. AARP chapter in Claremore. Loretta cherished all of her friends from these organizations. Loretta loved her church and church family, First Presbyterian Church of Claremore. She served as Treasurer, an Elder and Session member, and in Presbyterian Women. Many will tell you that she was one of the first people there every Sunday, usually with Charlotte Pauly, making the coffee. Loretta is survived by her sisters, Ninetta Potts, Shirley Stiewig and husband Kenneth, and Doris Swaim and husband Royce. By her daughters, Marla Myers, Dori Howe, and Ninetta Harwick and husband Joseph Peritore. By her granddaughters, Courtney Williams, and Megan Rosenberg and husband Liam. By her grandsons, Daniel Harwick and Shelby Williams. By her great-granddaughter Breanna Harwick. And, by her nieces, nephews, and cousins. Loretta is predeceased by her parents, Sie and Naomi Enyart, brother Sie Edward Enyart and wife Geraldine, and brother-in-law Lawrence Potts. Please send flowers to Payne Funeral Home (Musgrove Merriott Smith) in Claremore. Loretta asked that in lieu of flowers, please send donations to First Presbyterian Church of Claremore.

Loretta A. Genn passed away on Thursday, June 3, 2021 at her home in Claremore, Oklahoma. Loretta was born July 27, 1936 in Pawhuska, Oklahoma to Sie and Naomi (Forney) Enyart. As the middle of five, she truly enjoyed growing up in Pawhuska.... View Obituary & Service Information

The family of Loretta Ann Genn created this Life Tributes page to make it easy to share your memories.

Send flowers to the Genn family.