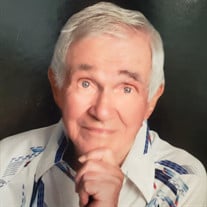 Memorial service for Louis Eilers will be a graveside service at  2:00 p.m., Tuesday, November 10, 2020 at Inola Highland cemetery. Louis passed away peacefully at home with love and family by his side on Thursday, November 5, 2020. He was 99. Which turns out he was 69 days from celebrating his 100th birthday. Born January 14, 1921, in Gilliam, Missouri at his family's farm to Fred Herman Eilers and Sadie Pearl Fisher. Louis graduated high school in Gilliam, MO and later attended Missouri Valley College in Marshall, Mo and University of Missouri in Columbia, Mo where he earned his Bachelors Degree at the age of 20. He then achieved his Masters Degree at 23. After graduating he landed his first and only job in Tulsa, OK in 1943 to work with Dow Chemical. He was a chemist that was granted 44 patents in his tenor with the company. While working in Tulsa he realized he wanted to settle down in a smaller town to remind him of his farm in Missouri so he purchased a home on 2.5 acres in Inola with this wife Thelma.  In his spare time he would be playing cards, crossword puzzles,  working in his garden or driving back to his family’s farm in Missouri. After retirement he poured into his pride and joy as he would call her, Trina was a great granddaughter that was his shadow. They had a relationship that was a blessing for both of them and he joked to anyone that would listen to him as “no blood relation what’s so ever but she’s my girl.” Education was a big priority to him and he would make sure that if any of his grandchildren that wanted to go to college, he made sure it was paid for. He was tireless and selfless by giving generous financial gifts to his community, church, colleges and would volunteer by picking up bread and sweets and delivering meals on wheels.  He was married just a few times and was a hopeless romantic. With his big blue eyes and infectious personality he would make a friend just about anywhere he would go. His laugh was certainly one you could hear and when you heard his laughter you knew he was up to something. His love also showed for the furry kind of friends as well. When he would talk to his dogs it would be in a different voice saying something like, puppy dog sounded more like “ole poor lil puddy dawg”. He was an incredible person on this earth and lived life to the fullest and yet was such a spiritual example as he was a member of the Inola United Methodist Church. He was teaching lessons about life up to the moment he passed away. He was a person of great character, integrity, education and extremely humble. He taught many of those around him that you don’t always have the choice to control what happens to you in life but you do have control of how your going to handle your reaction to the situation. That even our most profound losses are survivable. It is what we do with that loss — our ability to transform it into a positive event.  Louis was preceded in death by his parents Fred and Sadie Pearl Eilers, Wives: Norma (Johnson) Eilers - Hodge, Thelma B. Eilers - Starks, Bernice L. Eilers - Glass. Sons: Randall (Randy) Eilers and Mike D. Eilers.  He will be forever remembered by his surviving family members. Shirley and Jim Barnes of Catoosa, Trina, Matt, Madeline and MacKenzie McReynolds of Tulsa and he had 8 Grandchildren, 7 Great-Grandchildren and 5 Great-Great Grandchildren.  When you think of Louis, Louie, LH, Poppy, grandpa, dad, or papa, celebrate the good memories you have of him. There so many laughs and beautiful memories that have been shared with him and will continue to be shared about him. Rejoice in the fact that he is happy, remember that he will always love you and smile because one day we shall meet again.

Memorial service for Louis Eilers will be a graveside service at  2:00 p.m., Tuesday, November 10, 2020 at Inola Highland cemetery. Louis passed away peacefully at home with love and family by his side on Thursday, November 5, 2020. He was 99.... View Obituary & Service Information

Memorial service for Louis Eilers will be a graveside service...

Send flowers to the Eilers family.