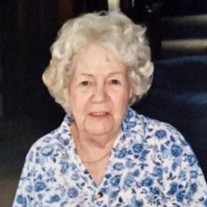 Visitation for Lucille Morrison will be held on Monday, Nov. 8, 2021 at the Chelsea Funeral Home from 2-8 p.m., with family greeting friends from 6-8. Service will be held 11:00 a.m. Tuesday, Nov. 9, 2021 at the First Baptist Church of Chelsea. Burial will follow at the Chelsea Cemetery. Lucille Morrison passed away on Friday, November 5th, 2021 at the age of 100.   The daughter of Dorey and Maggie Goins was born May 28th, 1921 and raised in Bluehawk, Oklahoma east of Chelsea where she would also attend school. As she became old enough to work she found a job as a full time baby sitter and waitress for the Clanton family in Vinita.  A few years later she found herself in Chelsea working as a waitress at a local café, It was there that she would first meet Roy Morrison. The two would begin dating and married in 1941. The newlywed couple would make their home in Chelsea while Roy was working for McDonell Douglas. This job would move them to California for the next couple of years. In 1943 they would move back to Chelsea, before moving once again to Illinois. In 1950 there would be one final move, this time back home to Chelsea for good. By this time Lucille had welcomed three daughters into the world; her previous years had been spent taking care of them. When her youngest daughter began school, Lucille decided to go to work. Over the next several decades Lucille would become a staple working in the Chelsea community.  She worked at Jays Cleaners, Archers Grocery, and J.P Morgans. It was while at J.P. Morgans that she began making donuts. That job would lead her into opening Granny's Donut Shop and Granny's Pancake House.  After closing down her own shops, she again began working for places such as Jiffy Mart, Rexall Drug, and Parks grocery store. She would officially retire at the age of 75. In her retirement she helped babysit her great-grandchildren for the next several years.   Throughout her life Lucille didn't have many hobbies or past times. She found her greatest enjoyment being surrounded by her family and friends. Sunday dinner at Granny's was a ritual. She has welcomed her children, grandchildren and great-grandchildren over the past several decades.  Just this past May she enjoyed celebrating her 100th birthday with all her family and friends. She will be missed by all who knew her.   She is preceded in death by her parents, husband Roy Morrison, daughter, Sue Coulston, four brothers and one sister.   Survivors include her daughters, Judy Herren and husband Buster, Mary Jo Lane and husband Joe; grandchildren, Kevin Coulston and wife Pam, Lynn Carroll, Shannon Payne, Shawn Payne, Stacy King and husband Greg, Lance Evans and wife Buffy, Mace Ward and wife Meagan; and great-grandchildren, Grant, Zach, Caleb, Garrett, Bailey, Nicholas, Mason, Hailey, Mesa, Tyler, Kayleb, Tanner, Camryn and Cole.  Great-Great Grandsons Kayden and Kolby along with many other extended family and friends. Memorial donations may be made to the Chelsea Senior Citizens.

The family of Lucille Morrison created this Life Tributes page to make it easy to share your memories.

Visitation for Lucille Morrison will be held on Monday, Nov....