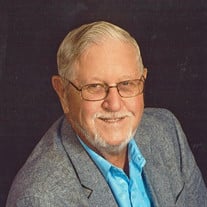 Mass of Christian burial for Lyle Marcotte will be held on 11:00 a.m. Thursday, August 27, 2020 at St. Cecelia Catholic Church. Burial will follow at Sweeten Cemtery. Visitation will be held on Wednesday, August 26, 2020 from 1-7 p.m. with a Rosary being held at 7:00 p.m. Lyle Henry Marcotte passed away on August 19th, 2020 at the age of 78. The son of Fred and Minnie Sparks Marcotte was born October 10, 1941 in Zurich, Kansas. As a young boy he was raised in Plainville, Kansas. There he attended school graduating with the class of 1959. After graduating Lyle joined the United States Navy. After completing his enlistment, Lyle was discharged and returned home to Plainville. He then took a job working for Seismograph Service. This job required him to travel all over the United States and around the world. It was during a trip to Pecos, Texas that he first met Lavern Wooldridge. The couple began dating, and would marry on March 18, 1967 in Cairo, Egypt. Over the next few years the newly wed couple lived and worked overseas. However in 1970 they decided it was time to return home to the states. They decided to settle near Tulsa, Oklahoma. In 1973 Lyle and his family made one more move, this time to Inola. Over the next few years with the decline of the oil industry, Lyle began working as a Medical Diagnostic Technician. A short time later he opened his own company L.L. Electronics. He ran the company until retiring around 2010. Lyle was a man of many hobbies and interest. Traveling was always an enjoyment, visiting many places throughout the world. He considered himself one of Inola's biggest fans. Even after all his children graduated, he missed very few athletic events especially football. After retirement he began focusing more on his farm. He loved sitting back watching the hummingbirds and raising cattle and even a few llamas. He was devoted to his church, St. Cecelia where he served as a Knight of Columbus. However with all the things he did, nothing made him happier than getting to spend time with his grandchildren. He is preceded in death by his parents, Fred and Minnie Marcotte; wife, Lavern Marcotte; son, Tim Marcotte; 3 sisters and 7 brothers._ Survivors include his son, Donald Marcotte and wife Kristina, and daughter Alisa Marcotte-Lucas and husband James; her grandchildren Keenin, Colton and Corbin Marcotte, Brennan Marcotte, Adam, Emma, Allie, Sidney and Bailey Liebherr, and brother, Raymond Marcottee. View and sign Lyle's online memorial at www.mmsfuneralhomes.com

Mass of Christian burial for Lyle Marcotte will be held on 11:00 a.m. Thursday, August 27, 2020 at St. Cecelia Catholic Church. Burial will follow at Sweeten Cemtery. Visitation will be held on Wednesday, August 26, 2020 from 1-7 p.m. with... View Obituary & Service Information

The family of Lyle Henry Marcotte created this Life Tributes page to make it easy to share your memories.

Mass of Christian burial for Lyle Marcotte will be held on 11:00...

Send flowers to the Marcotte family.