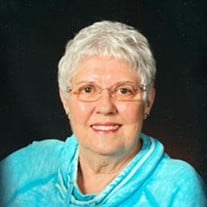 Mass of Christian Burial for Renee Elam will be held 11:00 a.m Saturday, January 23, 2021 at St. Cecilia Catholic Church. Burial will follow at Ward's Grove Cemetery. Visitation will be held on Friday, January 22, 2021 from 1-8 p.m., with family greeting friends from 5-8 p.m.  Marjorie Renee Elam passed away on Monday, January 18th, 2021 in Tulsa at the age of 78. The daughter of Lawson and Cecelia Meacham Eastep was born March 28th, 1942 in Pryor, Oklahoma. As a young girl she was raised on a farm in the rural community of Bushyhead. She would begin her education at the Love country school. Then it was off to Bushyhead school until completing the 8th grade. Her high school years were spent in Chelsea, where she frequently  referenced her home economics teacher, and how she prepared her for the future. Renee graduated from Chelsea High School as a member of the class of 1960. It was in high school that she first met Jimmy Elam. The two would begin dating and married on March 24, 1961 in Foyil. The newly wed couple made their home in Chelsea. There Renee worked for Milam Oil as a bookkeeper. Eventually  Milam Oil  became B&N Oil, but Renee still remained as the bookkeeper for over 30 years before retiring in 1995. After that she focused more on helping her husband Jim run Elam Trucking. She often claimed that it was her toughest job, while serving as president of the company for more than 27 years. Throughout her life Renee was always looking forward. She never wanted to be complacent. So while working she decided to attended Rogers State.  After taking several classes in science, she decided to apply to nursing school. She was accepted on her first application. However, as it often happens, fate intervened. A new grandchild was born into the family and Renee knew that her calling was to be a full time grandmother. Renee had many things that kept her busy over the years, such as dancing. She loved line dancing and the waltz. She enjoyed cooking, crocheting, and cross stitch. She also served as a lady bug for the local Shriners dune-buggy club. She helped count money at the yearly Shriners circus and work at their firework stand. In the past few years she even learned how to facebook and how to have a zoom call. However her family is what came first. She was a mom’s mom and her children always came first. Renee loved the fact that she got to take her kids to school and pick them up. When grandchildren came she loved snuggling up with them watching cartoons. As they became older she didn't miss a sporting event, concert or anything else.  If a grandchild was participating, she and Jim would be there. Her family was her life. She is preceded in death by her parents, Lawson and Cecelia. Survivors include her husband Jim Elam; daughters, Cheryl Dean and husband Bob, and Cindy Gillis and husband Kevin; grandchildren, Landon Dean and wife Emily, Jonathan Gillis and wife Jennifer, Nicholas Gillis and wife Anna, Zachary Gillis, and Samuel Gillis; and great-grandchildren Braxton and Blake Dean, and Sophia Gillis. Memorials may be made in Renee's honor to the Akdar Shrine at 2808 S. Sheridan Rd., Tulsa, Oklahoma 74129. View and sign Renee's online memorial at www.mmsfuneralhomes.com.

Mass of Christian Burial for Renee Elam will be held 11:00 a.m Saturday, January 23, 2021 at St. Cecilia Catholic Church. Burial will follow at Ward's Grove Cemetery. Visitation will be held on Friday, January 22, 2021 from 1-8 p.m., with... View Obituary & Service Information

The family of Marjorie Renee Elam created this Life Tributes page to make it easy to share your memories.

Send flowers to the Elam family.