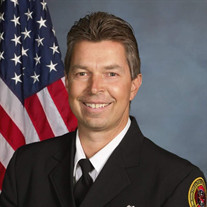 Funeral service for Mark Meyer will be held 11:00 a.m Thursday, March 21, 2019 at the Claremore First Baptist Church. Burial will follow at Oakhaven Memorial Gardens. Visitation will be held on Wednesday, March 20, 2019 at MMS-Payne Funeral Home from 4-8 pm. Mark Eugene Meyer passed away on Saturday, March 16th, 2019 at the age of 53. The son of Dennis and Sharon (Palmer) Meyer was born October 3, 1965 in Falls City, Nebraska.  As he became older he began attending Falls City Elementary. Around the age of 8, Mark and his family moved to the Tulsa area. There he would attend Cooper and Foster Elementary before starting High School at East Central. He was a member of the graduating class of 1984. After graduation, Mark began working full time as a meter reader for the City of Tulsa. One summer after a week of hard work, Mark decided to go jet skiing at Oologah Lake; this trip ended up more eventful than any other.  It was there that he first met Selina Ferrell. They began dating, and married on May 12, 1990 in Claremore. They made their home in Jenks. In 1991 their daughter was born, and they decided to move to Claremore. Over the next several years, Mark continued working for the City of Tulsa.  Things changed in 1998, when Mark was accepted into the Tulsa Fire Academy. This was his dream job. After completing the academy, Mark began his career on C shift and station 30. Over his career he also worked at station 21 and 31, before retiring in September of 2014.  Mark was many things to many different people. All who knew him, know that he was a loving son, husband, father, and grandfather. Some knew of  his love for softball, in fact he coached his daughter from the age of 4 until she went to college. After that, he was asked to help coach at Justus-Tiawah, and later at Verdigris High School. His positivity and ability to help motivate didn't go unnoticed. In 2018 he was a top 5 qualifier for the Nationwide U.S. Cellular coach of the year. To his co-workers, he was a guy they relied on in the heat of battle, fighting fires. He was also the guy who added a little comic relief when they managed to have a little down time. In fact, he was know by many of his peers as Mr. We Otta, as in we otta play this joke next. It was also his love of firefighting that inspired him to keep fighting after he was diagnosed with cancer in 2012.  His treatment took him all over the country. It was during one of those trips that Mark had the desire to start a foundation to help fight childhood cancer. Since the fire hydrant is the lifeline for a firefighter, it only made sense to name the foundation Hydrants of Hope. Mark would be the first to downplay his role with Hydrants of Hope, saying that without his fellow firefighters, friends, and family, it wouldn't have happened. Mark was chosen in 2013 by the Tulsa Rotary Club as Firefighter of the Year for his unselfish acts and dedication, not only to the citizens he served, but for his work to help children battling cancer. Last month, Mark was awarded the Tulsa Fire Department's Humanitarian Award for his continued efforts to better the lives of others In his spare time Mark had many other hobbies that he enjoyed. Trips to the beach were among his favorites. He also enjoyed watching sports, especially the Oklahoma Sooners. He made many trips to bowl games throughout the years. There was also the yearly fantasy football leagues, buying and selling just about anything, and most recently his desire to raise cattle. He is preceded in death by his grandparents.  Survivors include his wife, Selina Meyer, daughter, Kinsey Blunt and husband Brenden; grand-daughter, Taylee Ember Blunt; parents, Dennis and Sharon Meyer; brother, David Meyer; sister, Amy McClain and numerous other extended family and friends. Memorials may be made to Hydrants of Hope at 12898 E. 510 Rd. Claremore, Oklahoma 74019.

The family of Mark Eugene Meyer created this Life Tributes page to make it easy to share your memories.

Send flowers to the Meyer family.