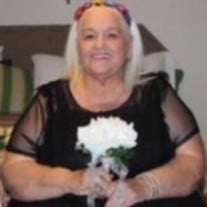 Funeral service for Mary Swinehart will be held on Friday, September 4, 2020 at Calvary Baptist Church. Burial will follow at Sweeten Cemetery. Visitation will be held on Thursday, September 3, 2020 at the Inola Funeral Home from 1-8 p.m., with family greeting friends from 5-8 p.m. Mary Ellen Swinehart passed away on Saturday, August 29th, 2020 at the age of 70. The daughter of Alva and Mary Smith Bookmyer was born April 1, 1950 in Mansfield, Ohio. There she would later attend Madison High School, graduating with the class of 1968. Over the next several years she would remain in Ohio and begin raising her family. She would later meet Raymond Hartley. They would marry and move to Oklahoma in 1985. Over the next few years Mary and her family would live in Muskogee. There she worked for several years at the Muskogee Stockyards. In 1997 Mary and her family made one last move to Inola. Quickly she became part of the Inola community. She could be found at every sporting event in town. In fact, she was at so many functions that everyone referred to her as g-maw. In 2018 Mary lived a real life love story. While on facebook she found her first true love from high school, Perry Swinehart. Unfortunately, after graduation Perry was sent overseas in the Army and life moved on. After reconnecting, Perry would visit Mary in Inola, and the two would marry on September 15, 2018. In her spare time Mary had many hobbies and pastimes that she enjoyed. She enjoyed fishing, garage sales, and going to swap meets. She also had a love for singing. She not only would sing at church, but would go just about anywhere there was a karaoke machine. However, her favorite times were the times she spent with her children and grandchildren. She is preceded in death by her parents, Alva and Mary Bookmyer, and brother, Joe Bookmyer. Survivors include her husband, Perry Swinehart; sons, Brian Barnett, Tom Wheeler and wife Marci, and William Hartley; daughters, Dawn Loyd and husband Robert, Kimberly Evrett and husband Sam, Jennifer Boyett, Jacki Thornton, and Kristin Cagle and husband Michael; grandchildren, Taylin, Kinley, Dylan, Briana, Melanie, Tyler, Dustin, Beth, Seth, Katie, Kyle, Raven, Blake, Raylee and Piper; 8 great-grandchildren with one arriving soon, sister, Cynthia Bookmyer and many nieces, nephews and cousins.

The family of Mary Ellen Swinehart created this Life Tributes page to make it easy to share your memories.

Funeral service for Mary Swinehart will be held on Friday, September...

Send flowers to the Swinehart family.