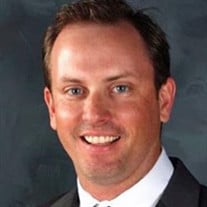 A memorial service for Scott Meador will be 2:00 p.m., Thursday, May 27, 2021 at First United Methodist Church in Claremore. Friends may visit at the funeral home on Wednesday, May 26 from 1pm-8pm, with family receiving visitors from 6pm-8pm. Michael Scott Meador passed away on May 19, 2021, in Tulsa, Oklahoma. Scott as he was known by everyone who knew and loved him was born in Muskogee, Oklahoma on July 31, 1976. He was the oldest child of Joseph Michael “Mick” Meador, DDS, and Suellen “Sally” Meador. Scott grew up in Checotah where he attended Checotah Public Schools and Checotah First United Methodist Church. Scott graduated from Checotah High School in 1995. At the end of his junior year in high school, he met his future wife Shauna. Scott and Shauna went on to attend Southeastern Oklahoma State University where he earned a Bachelor of Science degree in Wildlife Biology. He then continued his education at Texas A&M University-Commerce studying Environmental Science. Scott and Shauna got married in Las Vegas, Nevada on April 27, 2001. After getting married they lived around North Texas for several years. Scott began working at the Mesquite, Texas Health Department as a food inspector in 2003. The job also included work in the mosquito control program. In late 2003 the couple moved to Forney, Texas where they welcomed their first son, Jenson Michael in 2004 and their second son, Ian Scott in 2006. In 2007, Scott and his young family moved home to Oklahoma, settling in Verdigris and Scott began employment at the Tulsa Health Department. His experiences in mosquito control lead him to become the Vector Control Coordinator in 2009. In 2010 Scott and Shauna welcomed their third child a baby girl named, Maren Jane. Scott continued to work at the Tulsa Health Department in the Environmental Health Division until his passing. During his career, he earned many recognitions and was featured many times in local media speaking about the prevention of mosquito-borne illnesses. As a dedicated public health professional, Scott spent the past year working the COVID pandemic response, using his talents to help organize and coordinate the response. Scott helped connect countless people to vaccine appointments often giving out his cell phone number in case they had any questions or difficulty. As military history was of huge interest to Scott he collected veteran stories along the way by striking up conversations as they would come in for vaccine appointments. Scott loved being a Dad, he was so proud of his kids and was dedicated to being a part of all of their activities. He loved attending Boy Scout Camp with Jenson, cheering Ian on in baseball and basketball, and dancing with Maren in her dance recital just to name a few of the many things he enjoyed doing with his children. Scott did everything with his whole heart and was dedicated to every detail. He enjoyed traveling with Shauna and the kids, he was a huge baseball fan and was always up for a visit to a new ballpark, he loved live music and was an avid U2 fan, NASCAR was a favorite sport and Scott had a huge collection of memorabilia and was always ready with a sharpie in hand to get a driver’s autograph. Scott was a self–described 4th generation junker and loved vintage collecting and reselling online and in his antique booths in Claremore. Scott’s love of military history and vintage collecting led him to become a WWII living history reenactor. Scott could often be found restoring military helmets or working on other various related projects around the house. While living in Texas, Scott became an accomplished football official spending the next 16 years officiating High School and College games. Through this second career, Scott gained a brotherhood of wonderful friends. In 2020 Scott led his High School crew through the 3A State Championship, a tremendous honor for any official. To know Scott was to love him and he had a multitude of friends who were like family to him, the “North 40 Boys” from Checotah, his college Wildlife Conservation group, his Tulsa Health Department family, and all of his neighbors and friends from Verdigris that he got to know through his kids' activities, especially the Verdigris Troop 87 Boy Scouts. Scott is survived by his wife Shauna Meador and his children Jenson, Ian, and Maren Jane of Verdigris. His parents Mick Meador and Sally Meador of Checotah. His sister Emma Meador Carter and husband Justin Carter of Baldwin City, Kansas. His brother Jeff Meador, wife Ashley Meador, and nephew Knox Meador of Baldwin City, Kansas. Scott is also survived by a host of aunts, uncles, cousins, and members of Shauna’s family who were very special to him.

A memorial service for Scott Meador will be 2:00 p.m., Thursday, May 27, 2021 at First United Methodist Church in Claremore. Friends may visit at the funeral home on Wednesday, May 26 from 1pm-8pm, with family receiving visitors from 6pm-8pm.... View Obituary & Service Information

The family of Michael Scott Meador created this Life Tributes page to make it easy to share your memories.

Send flowers to the Meador family.