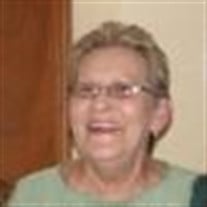 Dana Milene Bacon Hunt passed away on Saturday, March 28th, 2020 at the age of 73. The daughter of Miles "Dink" and Ruth Dennis Bacon was born on September 13th, 1946 in Claremore, Oklahoma. As a young girl she was raised in rural Rogers County. She attend schools in Owalla, and Bushyhead before entering Chelsea schools. She graduated as a member of the Chelsea High School class of 1964. After graduating Milene married her high school sweetheart Ted Hunt. Over the next several years they would live in Tahlequah and Neosho, before returning home to Chelsea. It was during this time that Milene returned to work, beginning with the local sewing factory, then taking a job as a meat cutter at Safeway which later became Homeland. After Homeland closed she began working for Carters Food in Vinita, retiring in 2015. Milene was known to have a large personality. When you walked into her home it was expected to give her a hug and kiss before anything else. She loved visitors and was the first to always lend a helping hand, give advice, or be a listening ear, she knew no strangers as everyone she met was considered a friend. Her life revolved around her family and friends, therefore she didn't believe in saying good bye but alway said “later". In her spare time Milene enjoyed traveling to New Mexico, raising cactus, gardening, doing pottery and basket weaving. She is preceded in death by her parents Dink and Ruth Bacon; son, Miles "Buckshot" Hunt; sister, Ruth Ann Weaver, and great-nephew John Michael Humler(Anderson). Survivors include her daughters, Angie Morose and husband Jack, Shelly Riley and husband Billy, daughter-in-law, Janice Harris and family; brothers, Rob Bacon and wife Linda, and Jim Bacon and wife Glenda; sister, Mary Jane Knight; brother-in-law, Jim Weaver; grandchildren, Jerry Riley and wife Courtney, Jean Riley and husband Montana, Teddy Riley, Chastity Long, Brooke Olsen and husband Eric, Shelby Morose, Sarah Bradshaw and husband Kevin, Gavin Hunt, and Kelsey Armstrong; 8 great-grandchildren; special friends Diane Boyd, and many nieces, nephews, and cousins.

Dana Milene Bacon Hunt passed away on Saturday, March 28th, 2020 at the age of 73. The daughter of Miles "Dink" and Ruth Dennis Bacon was born on September 13th, 1946 in Claremore, Oklahoma. As a young girl she was raised in rural Rogers County.... View Obituary & Service Information

The family of Milene Bacon-Hunt created this Life Tributes page to make it easy to share your memories.

Send flowers to the Bacon-Hunt family.