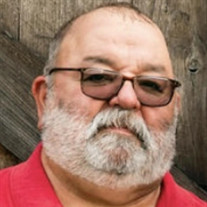 Service for Grady Morgan Dowell will be 2:00 p.m., Thursday, July 22, 2021 at First United Methodist Church, burial will follow at Woodlawn Cemetery. Friends may visit at the funeral home on Wednesday, July 21 from 2pm-8pm, family will receive visitors from 6pm-8pm. Morgan passed away on Sunday, July 18, 2021. He was 61. Born January 2, 1960 in Claremore, Oklahoma to Grady and Lillian (Davis) Dowell, Morgan attended school in Claremore, graduating with the class of 1978. He continued his education by attending technical school and receiving his electricians license. His working career began at Roark Electric and later Martin Marietta, the he worked for Bama Pie before opening his own business, Dowell Roofing and Guttering. After he received his electrical contractor license, Morgan opened Dowell Electric. During this time he also opened a well loved BBQ restaurant that allowed him to combine his two favorite things - talking to people and cooking. On September 29, 2978, Morgan married Charlene Hendricks and the couple made their home in Claremore and together raised their 3 children. Family was his first priority and he always provided well for them. He enjoyed the time spent with his family and usually had a feast for them, because of his love of cooking. Morgan loved to be outdoors, whether it was hunting, fishing, or working in the yard. He would lend a helping hand to anyone in need and volunteered for many organizations including Habitat for Humanity and the Claremore High School FFA. His faith was incredibly important to him and he was a very active member of First United Methodist Church for most of his life and served in many capacities there. He loved to tell a joke and was notorious for laughing at his own joke and messing up the punch line. Morgan had the ability to listen to people, make them feel heard, and help with their situation. He loved to the fullest and was known for his giving nature. Those family members that survive include his wife Charlene Dowell of their home in Claremore; his children Matt Dowell of Claremore, Lindsay Dowell of Durant, and Josh Dowell and wife Britney also of Claremore; grandchildren Parker Dowell, Maicey Dowell, and McKenna Dowell; sisters JoKay Dowell, Sue Brown, and Courtney Dowell; uncle Tom Dowell, uncle and aunt Stan and Debbie Davis, and aunt and uncle Florence and Bill Helmig. Morgan was preceded in death by his parents, and grandparents, Myrtle and Waymon Dowell. Those who wish to honor Morgan's memory may consider contributing to the St. Jude, ALSAC/St. Jude Children's Hospital, 501 St. Jude Place, Memphis, TN 38105.

Service for Grady Morgan Dowell will be 2:00 p.m., Thursday, July 22, 2021 at First United Methodist Church, burial will follow at Woodlawn Cemetery. Friends may visit at the funeral home on Wednesday, July 21 from 2pm-8pm, family will receive... View Obituary & Service Information

The family of Morgan Dowell created this Life Tributes page to make it easy to share your memories.

Send flowers to the Dowell family.