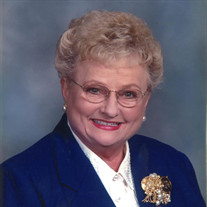 Naomi Hallyjane Layton was born on March 29, 1934 to Clarence E. And Ruth A. (Atkins) Layton in Vinita, Oklahoma. She grew up on a farm on the Rogers/Nowata County line northwest of Chelsea and attended Chelsea Public Schools where she was a studious academic. During World War II, her father ran the Gano Oil Company Station in Chelsea while her mother worked part-time at Nix's Grocery in town. Naomi enjoyed playing baseball with the neighborhood kids in the vacant lot next to the Gano Station. In High School, she played guard on the Girls Basketball team. One of her claims to fame is that in her Senior English Class, she sat behind Ralph Terry, who would go on to be the pitcher for the 1954 New York Yankees. In 1952, she graduated as Valedictorian of Chelsea High School and matriculated to Northeastern Oklahoma A & M College in Miami, Oklahoma. She began her professional career working in the Bank of Chelsea and later also worked for Boulder Bank in Tulsa. On August 16, 1955, she married Richard Dale Lynch in Chelsea, and the couple made their home there until Dale was drafted into the Army during the Korean Conflict. She traveled with him to various assignments across the country, eventually landing at Fort Huachuca in Sierra Vista, Arizona. There they made life-long friends and grew to love the geography of the mountains. While there, she worked as a Civil Service Clerk for the Fort's Administrative Office. After Dale's military service ended, the couple returned to live in Chelsea. In 1962, they moved to Catoosa, Oklahoma, where Dale was hired to teach vocational electronics for the Catoosa Public Schools. Naomi managed the residential duties and supported him at school and civic activities such as the Parent Teachers Association, of which she was a long-term member. She was an avid supporter of public education and was a founding member of the Catoosa Education Foundation. She was also a member of the Catoosa Extension Homemakers and a Past President of the Lynn Lane Garden Club. She was initiated into Chelsea Chapter Number 190 of the Order of the Eastern Star and demitted to Catoosa Chapter Number 360 when the couple moved there. In 2009, she was honored for 50 years of service to the Order. Dale founded the Catoosa Fire Department in 1965 and Naomi served as its first dispatcher. In addition to answering the fire phone and talking on a base station set up in their garage, as Dale would leave to respond to the call, Naomi would telephone the other volunteers to alert them to the call for service. She would also take coffee, water, and refreshments to training sessions and to structural fires for the firemen. In 1971, Naomi was hired a a part-time clerk at the Catoosa Post Office and worked her way up through the ranks to become Postmaster on August 22, 1981. She held this position until she retired on October 2, 1992. She enjoyed serving her customers and instilled that value in her employees. She was solely responsible for lobbying for, coordinating construction of, and the transition to the current Catoosa Post Office, which should be of sufficient size to serve the community for the next 20 years. In 1990 Naomi was named "Woman of the Year" by the Women's Advisory Council of the Tulsa Sectional Center Post Office which comprised 267 Post Offices in the eastern half of Oklahoma. She was a member of the United Postmasters and Managers of America; the National Federation of Retired Federal Employees, and the Oklahoma Retired Postmasters. The family attended Catoosa United Methodist Church, where Naomi was a member of the United Methodist Women. After Dale's death, she became an Associate Member of Christ United Methodist Church in Tulsa where Naomi worked in the Widowed Persons Support Group. Naomi believed in honoring and preserving the history of our communities. She was a member of the Catoosa Historical Society, the Chelsea Historical Society, and the Rogers County Historical Society. She was a former member of the Northeast Oklahoma Questers antiquing club and served on Catoosa's United States Bicentennial Celebration Committee in 1976. Naomi, having grown up on the farm, always held a special place for the small family farmer. She was a member of the Tulsa County Farm Bureau and its Women's Committee. Naomi practiced promoting her community. The license tag on her car reads K2C OK, which stands for Catoosee, the old timer's pronunciation of Catoosa. She was a past member of the Catoosa Fire Department Ladie's Auxiliary. She was a member of the Catoosa Chamber of Commerce and served as President of the Chamber in 1990. She received the Chamber's Citizen of the Year Award in 2007 in recognition of her service and contributions to Catoosa. She received the Catoosa Sertoma Club's Service to Mankind Award in 1997, also in recognition of her service and contributions to the Catoosa community. For many years, Naomi served on the Boards of the Claremore Regional Hospital and the Community Action Resource and Development (formerly known as WaRoMa) Community Action Agency. Naomi departed this life on November 23, 2021 at her home. She was preceded in death by her parents, her husband Dale, a daughter Susan Janet Lynch, her brother Clarence Willard Layton and his wife Wanda (Tinker), her brother-in-law Wayne Allen Lynch, and several other relatives. Naomi is survived by her son Donald; her aunt Marjorie Atkins; cousins Rev. Herman Udell Wolff and wife Nancy, John Atkins and wife Sandy, Lowell Bruce Atkins and wife Leonor; and sister-in-law Rosemary Lynch. She is also survived by a host of other relatives and friends that she cared about and loved. View and sign Naomi's online memorial at www.mmsfuneral homes.com.

Naomi Hallyjane Layton was born on March 29, 1934 to Clarence E. And Ruth A. (Atkins) Layton in Vinita, Oklahoma. She grew up on a farm on the Rogers/Nowata County line northwest of Chelsea and attended Chelsea Public Schools where she was... View Obituary & Service Information

The family of Naomi Lynch created this Life Tributes page to make it easy to share your memories.

Send flowers to the Lynch family.