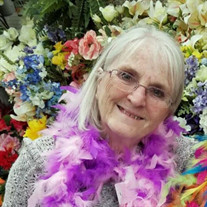 Visitation for Nikki Sue Merritt will be 1-8 p.m. Friday, March 5, 2021 at Chelsea Funeral Home. Family will greet friends from 6-8 p.m. Nikki passed away at her home in Chelsea on Saturday, February 27, 2021. She was 70 years old. Nikki Sue Brinlee was born January 12, 1951, in Tulsa, Oklahoma to Garland and Margret Lee (Teter) Brinlee. She spent her early years being raised in Tulsa and began school at Hawthorne Elementary before moving to rural Rogers Country where she would begin attending  Bushyhead schools.  After the eighth grade, she would begin attending Chelsea High School, graduating in 1969.   Wanting to continue her education she enrolled at Oklahoma Military Academy, (now Rogers State University), where she earned her Associate's degree. December 27, 1971, Nikki married Jim Merritt. The couple lived in Chelsea a short time before moving to Dallas, then moved to Pawhuska where they started their family, being blessed with three children, before returning to Chelsea in 1985.   In the mid-1980's, Nikki and her mother opened Heart's Desire in Adair, which sold antiques, and  arts and craft items. A few years later, the business relocated to Chelsea where they added a flower shop in the store. It was also during this time that Nikki became very involved in her community. Over the next 25 years, Nikki served her community as a member of the Chamber of Commerce, and later as Executive Director. She created the Chelsea Area Tourism Society (C.A.T.S.), and contributed to the community with events such as 4th of July celebration, Chelsea Jamboree, annual Easter egg hunt, Pecan Festival, Trick or Treat on Main street with Mummy Lou's Diner, and May Day baskets with her famous secret recipe sugar cookies.  She also volunteered many years at the summer reading program and served on the library board. She was well loved throughout the community.  After her first grandchild was born, she and her mother began babysitting him and a few other special children at Playcare.  She loved creating "magical moments" for all of her children and grandchildren.   She became known as Grammie to many local children who attended Playcare. Later, Heart's Desire and Playcare would close, but she continued to babysit her grandchildren at her home. Nikki also spent the past 16 years working at Dollar General, a place that she felt was more than just a job, but a calling to continue to bring joy to all who came in.       Throughout her life there were many things that brought enjoyment to Nikki.  In 2008, she and longtime friend Harvey Leathers created a loving and cherished relationship. They would become the centerpiece in each other's life. They enjoyed many things, especially traveling.  Her favorite places were to Ft. Scott, KS, Tucumcari, NM on route 66 where she enjoyed staying at the Blue Swallow Hotel, and Pagosa Springs, CO. Other past times included  crafting, sewing, and drawing. She was extremely creative and artistic. She especially enjoyed her weekly drawing club that she created with a few family members and friends.     Nikki was preceded in death by her father, Garland Brinlee II, and many other family members.     She is survived by her significant other, Harvey Leathers; parents, Frank and Lee Spence; children,  Marilee Hagebusch and husband Matt, Jamilee Jones and husband Danny, and Rowdy Merritt and wife Amanda; grandchildren Nick and Ben Hagebusch, Tessa Jones, Maverick and Lincoln Merritt, and Hailey Davis; great-grandchildren Jayden and Emmalyn Davis; and all her 'bonus' grandchildren; siblings; Tres Brinlee, Frankie Spence, Michael Spence, and Teresa Green, as well as several nieces and nephews, cousins, and  extended family. Memorial donations may be made to the Chelsea Animal Shelter.  View and sign Nikki's online memorial at www.mmsfuneralhomes.com.

Visitation for Nikki Sue Merritt will be 1-8 p.m. Friday, March 5, 2021 at Chelsea Funeral Home. Family will greet friends from 6-8 p.m. Nikki passed away at her home in Chelsea on Saturday, February 27, 2021. She was 70 years old. Nikki Sue... View Obituary & Service Information

The family of Nikki Sue Merritt created this Life Tributes page to make it easy to share your memories.

Visitation for Nikki Sue Merritt will be 1-8 p.m. Friday, March...

Send flowers to the Merritt family.