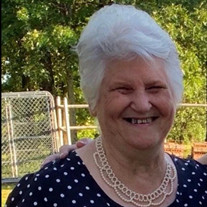 Nora Ellen Littlejohn was born late in the night of Dec. 31, 1946 to the Charlie and Sarah Barbaree in McAlester, OK. She was so tiny when she was born she fit in a shoe box as her momma and daddy always told the story. She went home to be with our Lord and Savior on July 9, 2020 after a very long illness. Nora would grow up in Pittsburg County, graduating from McAlester High School in 1964. She met the love of her life, James Littlejohn and married him in less than 6 months on Jan 2, 1966. They lived for a short time in McAlester and then would move to Oklahoma City for a couple of years before settling in Claremore, OK where they would raise their two children and spend most of their lives together. Nora was a homemaker and a seamstress out of her home. She did alterations for Imperial Cleaners, A1 Cleaners and Ann’s Cleaners for a total of more than 40 years. Her and James would move back home to the farm in 2004, making their final home together on the land she grew up on and that everyone in the family calls home. She was a member of the Country Fare Quilters Guild in Claremore, serving as a leader for more than 37 years, she was also a member of the McAlester guild for several years after moving back home, she was an exquisite quilter and has left a legacy of beautiful quilts behind to remember her by. In the years she was a member of the guild she would make several childrens quilts which were donated to DHS for those taken into foster care. Nora will be remembered for her love of her family, especially her grandchildren, whom she meant the world too. Once Nora had her “kids” with her she didn’t like to send them home and would find any excuse possible for them to be able to stay just one more day with her. She will also be remembered for her cooking, she always had a pie or cake made and there was never an empty cookie jar, there was always a fresh pitcher of tea made if someone stopped by to visit. Nora is survived by her husband of the home, James Littlejohn of McAlester, OK. One son, James L. Littlejohn of Chelsea, OK, a daughter and son in law, Jake Shatto and Sarah Swisher-Shatto of Claremore, OK and 5 grandchildren, Wynter Littlejohn of Wetherford, OK, James Swisher, Bradon Swisher, Kylah Swisher and Clyde ‘Tumbleweed’ Swisher all of Claremore. She is also survived by several nieces and nephews and other family members who will all feel the loss of her sweet spirit. She was preceded in death by her parents, Charlie and Sarah Barbaree, her triplet brothers at infancy, and a grandson, William J Swisher.

Nora Ellen Littlejohn was born late in the night of Dec. 31, 1946 to the Charlie and Sarah Barbaree in McAlester, OK. She was so tiny when she was born she fit in a shoe box as her momma and daddy always told the story. She went home to... View Obituary & Service Information

The family of Nora Ellen Littlejohn created this Life Tributes page to make it easy to share your memories.

Nora Ellen Littlejohn was born late in the night of Dec. 31,...

Send flowers to the Littlejohn family.