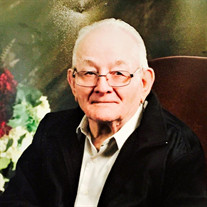 Graveside service for Olen Shirel will be held 10:00 a.m. Wednesday, August 12, 2020 at the Chelsea Cemetery. Olen Thomas Shirel, 94, passed away August 7, 2020 in Tulsa, OK. He was born April 3, 1926 in Bernie, MO to Thomas and Lottie Shirel. He met Melda Rathfon in 1945, and they were married on April 5, 1947 in Claremore, OK. Prior to marriage, Olen was in the United States Army in World War II. He was 4th Platoon Assistant Squad Leader in Company D and later was in the 1306 Combat Engineers of the 8th Army and stationed on the island of Japan. He was also a member of the American Legion Post 60 in Chelsea. He was a licensed minister for over 60 years in the United Pentecostal Church and pastored for 32 years in Chelsea, Chouteau, and Wagoner, OK. Olen was also skilled working with his hands and enjoyed carpentry and auto mechanics. His friends and family remember Olen for his love of preaching, singing and playing the guitar. He loved God, his family and the people he pastored above anything else. He is survived by children, Olen, Jr. and wife, Mary of PA, Kathryn Beauchamp of Chouteau, Doug and wife, Kim of AR, and Tim of Chouteau; brothers, Rev. Bill Shirel of Muskogee, Jerry Shirel of TX, and Leroy Shirel of Collinsville; 8 grandchildren, Scott and wife, Tanya of MI, Nic and wife, Lauren of PA, Keegan of Washington, D.C., Katrina and husband, Clayton of Chouteau, Melinda of Pryor, Jenni & husband, Jeremy of AR, Stefani & husband, Daniel of AR, and Tiffany of Pryor, 8 great-grandchildren, Tanner, Sam, Mason, Adam, Christopher, Lauren, Alex & Lilea; 3 great-great-grandchildren, Cameron, Aaron & Ashton, and many nieces, nephews, and loved ones. He was preceded in death by his parents, Thomas & Lottie Shirel, his wife, Melda June Shirel; brothers, Harold Shirel & Rev. Harley Shirel; sisters, Nadine Gregory, Violet Dobson, Annie Keller, and Vernie Williams; and one granddaughter, Maggie Shirel. View and sign Olen's online memorial at www.mmsfuneralhomes.com

The family of Reverend Olen Thomas Shirel created this Life Tributes page to make it easy to share your memories.

Graveside service for Olen Shirel will be held 10:00 a.m. Wednesday,...

Send flowers to the Shirel family.