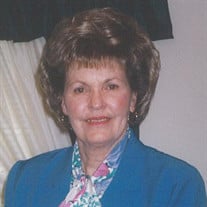 Funeral service for Oleta Faye Baker will be held 10:00 a.m. Tuesday, January 26, 2021 at the Clearview Assembly of God Church. Burial will follow at the Spavinaw Cemetery. Visitation will be held on Monday, January 25, 2021 at the MMS-Payne Funeral Home from 1-8 p.m. with family greeting friends from 5-8 p.m. (Please do your best to maintain social distancing) Oleta Faye Baker passed away on Wednesday, January 20th, 2021 at the age of 87. The daughter of Ezekial and Coralea Moore Holland was born at home on December 27, 1933 in Bushyhead, Oklahoma. As she became older she would begin attending Foyil schools. It was there that she would meet Dow Andrews. Eventually they would begin dating and married on June 2, 1950. A few years later Oleta and Dow moved to Tulsa and began to raise their family. She began working at Buds Family Foods. For over 25 years she worked in the meat department as a meat wrapper. After a brief retirement she began working again at WalMart. There she would work another 6 years. While still living in Tulsa, Oleta would meet Andrew Johnson Baker. They would marry in 1966. They continued living in Tulsa for many years and later moved to Verdigris where they lived until John passed away in 2010. Then wanting to be closer to her family Oleta moved to Claremore where she was a current resident. She was an active member of the Verdigris Assembly of God for many years and then after moving to Claremore she began attending Clearview Assembly of God. In her spare time Oleta enjoyed working, raising flowers, spending time at Church, and caring for her little dog Zoe. She is preceded in death by her parents Ezekial and Coralea Holland, husband John Baker, 3 brothers and 1 sister. Survivors include siblings ET Holland of Carlsbad, NM. and Paula Brown of Greenville, KY. Children, Gary Andrews and wife Treila, Michael Andrews and wife Lydia, and Keith Andrews and wife Debbie; step-daughter, Brenda Maple and husband Ed; step grand children Jeff and Kim. Grandchildren, Shelli Lewis, Ragayle Andrews, Derrick Haddox, Ashley Reed, Josh, Jennifer, Shawn, Brandon, Dowry and Levi Andrews, 14 great-grandchildren and many other extended family and friends. View and sign Oleta's online memorial at www.mmsfuneralhomes.com

The family of Oleta Baker created this Life Tributes page to make it easy to share your memories.