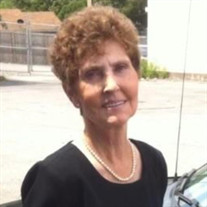 Patricia Ann Vann passed away on February 10th, 2022 at the age of 72 years old. Patricia was born to James and Julia Clay in Tahlequah, Ok.  Growing up Patricia and her family moved several times over the years.  They finally settled in Inola where she graduated with the class of 1967.  Pat earned the All State Basketball player for the Inola Longhorns during her time on the team.  During her high school years she met the love of her life Jack Vann. Jack saw Patricia riding around town in the back of a pick up truck and chased her down eventually and the rest was history. Jack and Patti had 53 wonderful years together. They were married on February 3, 1969, the couple moved around some in Rogers county but settled down and laid their roots in Inola, Oklahoma where they raised a family and made many memories.  Patricia loved to crochet. One of her favorite blankets she made was a Native American themed blanket for her dad, which he was eventually buried with.  She was an avid hunter and fisherwoman.  According to Jack she was a “crack shot” with a gun.  After high school she graduated from beauty college and became a beautician for a brief period.  However, Pat found her true passion when she became a teacher at the Blue Star Kiddie Ranch.  She loved those kids as her own and even taught multiple generations over the years. She eventually retired and became a “work at home” mother when the boys were in middle school.  Pats greatest joy was being with her family. She and Jack loved to go watch and cheer for their kids and grandkids at their sporting events. Pat was very involved in coaching and referring the Inola Soccer recreation league.  Patti was a mom and grandma to many of the boy’s friends & teammates. There would be many nights she would be baking cookies for all the extra kids hanging out at the house.  Pat also enjoyed teaching her granddaughter, Darcey, how to bake. Darcey can now make the best pineapple upside down cakes, just like her Nana.  Patricia was preceded in death by her father James Clay, sister Tania, and brother Andy. She is survived by her husband Jack Vann of the home; mother, Julia Clay, sons, Jackson Vann, Sam Vann and wife, Courtney; brothers, Tim Clay, Jim clay and Robert Clay; sisters, Tonia Ward & husband Darren and Sonia Boswell & husband Rick; grandchildren, Zach Vann and wife, Bailey, Cory Vann and wife Kelsey, and Darcey Vann; and two great grandchildren Blair Vann and Mason Vann and many other nieces, nephews and extended family.

Patricia Ann Vann passed away on February 10th, 2022 at the age of 72 years old. Patricia was born to James and Julia Clay in Tahlequah, Ok.  Growing up Patricia and her family moved several times over the years.  They finally settled in Inola... View Obituary & Service Information

The family of Patricia Vann created this Life Tributes page to make it easy to share your memories.

Send flowers to the Vann family.