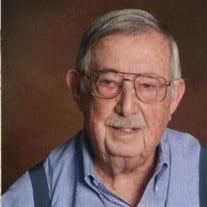 Ralph L. Watkins, 93, departed to his heavenly home on December 2, 2020, in Carrollton, TX, from COVID. He was greeted by his wife, Lila (Harrison) Watkins, infant son, Martin, and son, David. Born and raised in Littleton, CO, his family relocated during his early teens to Rogers, AR, building and operating a family dairy farm until he enlisted in the Navy for WW II. Ralph graduated from Spartan College of Aeronautics and Technology where he began and ended his 35-year career with American Airlines Tulsa Maintenance Facility while achieving Master Mechanic status. When asking Lila’s grandmother for her permission to marry Lila, he was led to the Lord and accepted Jesus Christ as his savior. He was a founding member of Memorial Bible Church, in Tulsa, OK, and Eastern Hills Baptist Church, in Claremore. Over the years, he served as Sunday School teacher, deacon, and church leader, traveling to rural churches in OK, MO, and AR to share his story of salvation and raise awareness for Wycliffe Bible Translators. Ralph moved his young family to rural Claremore in 1960 and resided there until he moved to Texas in 2016. His living legacy includes his children: sons, Raymond Watkins and wife, Karen of Lewisville, TX; Marvin Watkins and wife, Nim of Claremore, OK; Mark Watkins and wife, Shannon of Antioch, TN; and daughter Laurie Watkins Hess and husband, Steven of Killeen, TX, 13 grandchildren, and 15 great-grandchildren. He is also survived by his sister, Joy Watkins Wilkerson of Enumclaw, Washington, and many wonderful nieces and nephews. Celebration of his life will include family visitation at the MMS Funeral Home, Claremore, OK, 1:00 PM to 8:00 PM, Friday, December 11 with social distancing and masks requested in respect for others and for the safety and health of all those attending; memorial services, Eastern Hills Baptist Church, Claremore, OK, 10 AM, Saturday, December 12, and burial immediately following at Carselowey Cemetery, Ketchum, OK. In Lieu of flowers donations may be made to the Eastern Hills Baptist Church Youth Ministry fund. View and sign Ralph's online memorial at www.mmsfuneralhomes.com.

Ralph L. Watkins, 93, departed to his heavenly home on December 2, 2020, in Carrollton, TX, from COVID. He was greeted by his wife, Lila (Harrison) Watkins, infant son, Martin, and son, David. Born and raised in Littleton, CO, his family relocated... View Obituary & Service Information

The family of Ralph Louis Watkins created this Life Tributes page to make it easy to share your memories.

Ralph L. Watkins, 93, departed to his heavenly home on December...

Send flowers to the Watkins family.