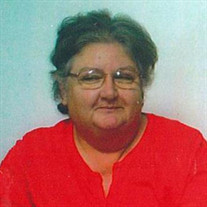 Service for Randy Chaney will be 2:00 p.m., Tuesday, December 28, 2021 at MMS-Payne Funeral Home Chapel, burial will follow at Oakhaven Memorial Gardens. Friends may visit at the funeral home on Monday, December 27, from 1pm-5pm. Randy Sue (Burd) Chaney was born in Tulsa, Oklahoma on December 29, 1947 to Everett and Hattie Mabel Burd. Randy went to be with her Lord on December 21, 2021 after a valiant battle with cancer. She was raised in Claremore and attended Claremore schools. She worked outside of the home most of her adult life, including at the Port Deli and Claremore High School cafeteria. Randy married the love of her life on October 21, 1976. She and Cotton celebrated 46 years of marriage 2 days before his passing on October 23, 2021. Randy attended First United Methodist Church of Claremore. She loved her church family dearly, but her greatest love was her children, grandchildren, and great grandchildren. She enjoyed puzzles, reading, crafting, and taking vacations with her husband, her parents, and her sister. She had an excellent sense of humor and was very quick witted. She was great at putting those talents to work in her poetry. Randy raised 4 children, Tammy Rawlings (Chaney) and husband Brad, Terry Bauser, Tommy Bauser, and Tricia Bauser. She is preceded in death by her mother Hattie Mabel Burd, father Everett Burd, husband Nolan "Cotton" Chaney. She leaves behind 4 children, 18 grandchildren, and 27 great grandchildren, her sister Renee Alttebury and several nieces and nephews, and sister-in-law Wanda Oard. Randy will be greatly missed by all who knew her.

The family of Randy Sue Chaney created this Life Tributes page to make it easy to share your memories.