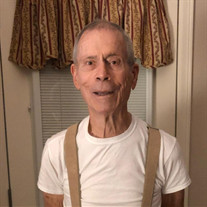 Richard (Dick) L Wergin passed away on November 12, 2021. He was born in Winner SD on June 7, 1936 to Lena Burr and Carl R Wergin. He married Martha M Sharp, on June 6, 1956, and they had five children. Dick spent his childhood years in Winner. His dad had a rural mail route to Mission SD where his grandfather owned a gas station, and Dick accompanied his dad on the mail route whenever possible or necessary. He loved to talk about cars and motorcycles, and had a natural mechanical ability. He attended Winner High School, but had to take over the rural mail route to help support his mother and brother when his father died in 1954. The mail route was sold in 1959, so he moved his family to Hot Springs SD. In 1960 he got a job with Mines Development and moved the family to Edgemont SD. He always wanted to go west, and it was a dream come true when he received a job offer at Sierra Army Depot in Herlong CA in 1966. He was transferred  to Hill Air Force Base UT in 1973, and after seeing his children grown, married and starting families of their own, he retired in 1993, returning “back home” to South Dakota in 1994.  In 1997, Dick and Martha moved to Claremore OK to be near one of their children. They returned to Utah in 2004 because Dick missed his boys, but the cold, snowy winters brought them back to Oklahoma in 2008.  Dick was happiest when spending time with family, and loved telling stories and getting one over on others; he would say, “There’s one for the gipper!” as he made an imaginary scoreline in the air. His family was always near and dear to his heart, and spending time with his grandchildren brought him the greatest joy as Parkinson’s disease took it’s toll on his body and mind the past few years.  Dick is survived by his wife of 65 years, his 5 children, Sally (Gary) Arthur of Hurt VA, Bruce (Janet) of Roy UT, Susan (Oscar) Morales of Owasso OK, Brian (Jodi) of West Haven UT, and Brad (Joyce) of Roy UT;  12 grandchildren, and 23 great grandchildren. He was preceded in death by his parents and his younger brother, Lawrence (Larry). Dick was cremated, and a memorial and burial will take place in Roy UT at a later date.

Richard (Dick) L Wergin passed away on November 12, 2021. He was born in Winner SD on June 7, 1936 to Lena Burr and Carl R Wergin. He married Martha M Sharp, on June 6, 1956, and they had five children. Dick spent his childhood years in Winner.... View Obituary & Service Information

The family of Richard Leroy Wergin created this Life Tributes page to make it easy to share your memories.

Send flowers to the Wergin family.