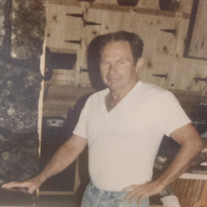 Service to be held on Saturday, March 27, 4pm, at 404 C St Sw, Inola Ok 74036. Service will be a celebration of his life. Robert (Bob) Eugene Fellers was born on March 31, 1936, in Tulsa, Ok. He passed away on February 16, 2021, age 84, at 404 C St Sw, Inola, Ok 74036. Bob's wife, Carolyn, and twin daughters, Fran and Jan, were at his side as he passed peacefully. He is survived by his wife, Carolyn Fellers, three daughters Karla Benge, Jan Fellers, Fran Fellers; 1 son, Kelly Fellers; and 6 grand and 12 great grand children. Also, he's survived by his brother Frank,and sisters Susie and Rosemary. Bob was great at sports including baseball and football. As a father, he loved foot racing his twin daughters; teaching them how to run fast. He called them his " Jack Rabbits ", as he often could not tell them apart. From a young age, he worked hard whether on his parents, Bud and Willie's, dairy farm or fixing flats at their general store in Catoosa Ok. He was drafted in the US Army in 1958, and was released with medical disability in 1959 due to leg injury. He was a heavy equipment diesel mechanic in the US Army. He obtained his diesel mechanic certification from Okmulgee Tech school prior to his Army service. He became known in Ok, Ks, Tx, etc. as the top heavy equipment diesel mechanic who could repair anything. Also, he became a pipeline welder, specialty waterline tie ends, etc. He started his own business, Fellers Welding and Heavy Equipment repair in 1968, quickly known as the fix it, hard working, tough as steel, man. Bob's son, Kelly, worked alongside his father, starting at a very young age. Kelly learned his dad's same great skills as a welder, mechanic, steel fabricator, etc, which Bob always called him his swamp stick helper or simply "Boy." Kelly passed same skills to his son, Kyle, and even daughter Bonnie. Bob worked with the City of Tulsa, Texaco Refinery, Port of Catoosa, Dallas Ft Worth airport, Spavinaw and other large contracts in which his work on those pipelines are still a means of water supply to several cities. His son was by his side helping at many of those jobs or out of his shop. Bob was always protective of his daughters vowing to never give away his daughters at their weddings, which he kept his word and did not. He always said no one could take care of his daughters as well as him. He always told his girls " if a man can't afford to buy you a steak dinner every day, they are not good enough!" Bob retired in 1986, moved to Drury, Missouri, in which he and Carolyn, had a goat and cattle farm. The farm is a beautiful 150 acres, with a log home built from their properties' pine logs, overlooking Bryant Creek. Bob and son, Kelly both restored an old Cat Dozer, he used to clear the property, and make a road alongside Bryant creek, nearly sinking it, calling his son and asking "think we can get unstuck," which they did. His kids and grandchildren loved feeding his goats, hiking with Bob along the property bluffs, and fishing at Bob's favorite fishing hole on Crony Rock. Bob farmed until he fell in his barn and almost froze to death in Nov. 2018. He was life flighted to Cox South Springfield. Bob had a strong will to live and was released for rehab within a week. At rehab, Bob received radiation treatment for squamous cell on his hand and arm for several weeks and it was eradicated. He tried a few times to escape rehab. After rehab, he moved to his daughter's home at 404 C St SW, Inola Ok, as Bob was prone to falling and developed vascular dementia. Bob stayed positive and valiantly fought Alzheimer's dementia from 2018 until his passing Feb. 16, 2021. His family greatly appreciated the time spent with Bob as he demonstrated love and fortitude with his situation. He always wanted to work, whether going to feed animals, watering the flowers, checking the oil in his daughters vehicles, etc. He especially liked Jan's 1970 Mustang Mach I that he rebuilt the 351 Cleveland motor in. It was his wife Carolyn who he appreciated the most. Carolyn provided daily care for him and if Carolyn was not there he always asked where's " Sleepy, " his loving endearing Nickname for her. Bob always said Carolyn was his good looking, hard little worker. Bob remained very mechanically inclined even with Dementia as Carolyn and daughters had to be on their toes because he always figured out how to get out of the house, through the gate, and around the shop, out of sight. He'd always respond , laughingly, he had to go feed his animals or check his tractor and try to sneak out. Even when Bob became bed ridden, he enjoyed playing ball with the dogs, looking out the window at the flowers, birds, and garden lights, as he always enjoyed the simple things of life. Bob always said "back at you " when you said I love you, but shortly before he passed, he said clearly with conviction "I Love You".

The family of Robert Eugene Fellers created this Life Tributes page to make it easy to share your memories.

Send flowers to the Fellers family.