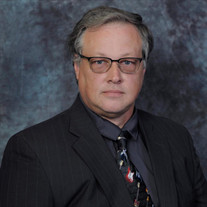 Robert Edward Jones left this world to boldly go to heaven on Friday, January 29th, 2021. He was 58 years old. He was born on July 16th, 1962 to Charles J. Jones and Dorothy Jones (Capps). He married the love of his life, Rita Willhoite on April 11th, 1986 and they had two daughters, Robin and Lauren. Robert grew up in Chelsea, OK as the 6th of 8 children. He attended Chelsea schools were he enjoyed tormenting the teachers and graduated, much to the relief of his teachers, in 1980. He graduated from Northeast Area Vo-Tech machine shop program in 1980 where he learned to use his talented brain for good and not evil. He began working at Nupar Manufacturing in 1980 as a tool and die maker. He continued working for Nupar until they closed their doors in 2015. Over the 35 years he worked at Nupar he moved up into the engineering department where he had a special knack for tooling design. After Nupar closed, he went to work for Whirlpool as a senior tooling design engineer. He worked at Whirlpool for 5 years until his unexpected death Robert would be described as family man. If he wasn’t working in the garage or grilling, he was out deer hunting or fishing or finding a project to do. He always had a project going on somewhere, sometimes they never got finished. He enjoyed fixing things. From mowers and cars to appliances and remodeling, there wasn’t much he couldn’t do. His girls would say he was the best daddy in the world. He was always there for them, whether it was teaching them to play chess and drive a car, or how to land remote control helicopters on the ceiling fan .He was quick with the dad jokes and nothing good ever happened when he said “hey! Watch this!.” He was a doting uncle to many nieces, nephews, and great nieces and great nephews, and even shared his birthday with his great niece Katie Prather. In 2011, Robert acquired his favorite child, Zeus, his beloved doberman with whom he formed a special bond. The only thing that could outshine Zeus was his twin grand babies, Natalie and Canyon, who came into his life in July 2016. His favorite thing was being a PawPaw. He took them on many lawn mower rides, taught them how to cast a fishing pole , and spoiled them rotten. He also enjoyed being the big bad wolf, chasing the twins around the house, and allowing them to do all the things their mommy and daddy didn’t allow them to do at home. Over the course of his life, he made many friends through colleagues, church, and his neighbors. He would do anything for anybody, and he would always go above and beyond. He is proceeded in death by his father, Charles J Jones; his mother, Dorothy Capps; his sister, Linda Cordry, and his nephew, James Cordry. Robert is survived by his wife, Rita Jones of the home in Claremore; his daughters, Robin Barrett and husband, Kevin Barrett of Claremore; Lauren Lee and husband, Patrick Lee of Sapulpa; Grandchildren, Natalie Barrett and Canyon Barrett; Bonus daughters Dia Stone, Tina Rainwater, and Katelyn Buzzard. Brothers, Chuck Jones and wife Rose, Brian Jones, sisters, Ruby Bickford, Judy Burger, Leota Mills and husband Gary, and Cheryl Easter.

Robert Edward Jones left this world to boldly go to heaven on Friday, January 29th, 2021. He was 58 years old. He was born on July 16th, 1962 to Charles J. Jones and Dorothy Jones (Capps). He married the love of his life, Rita Willhoite on April... View Obituary & Service Information

The family of Robert Edward Jones created this Life Tributes page to make it easy to share your memories.

Robert Edward Jones left this world to boldly go to heaven on...