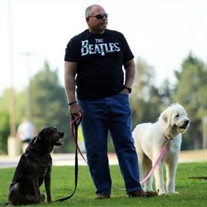 Funeral services for Robert Steven LeGate will be held at 3:00 pm Thursday May 27th, 2021 at Claremore Elks Lodge, 1820 Summit Drive, Claremore, OK. Services officiated by Joe Spann under the direction of MMS-Payne Funeral Services. Please dress casual, it is what Steve would want. Steven passed away at his home on Sunday May 23rd, 2021 at the age of 64. Robert Steven LeGate was born on September 28th, 1956 at the Franklin Hospital in Claremore Oklahoma. Born and raised in Claremore to the parents of Dick and Elizabeth LeGate, Steve attended Westside Elementary, Will Rogers Jr. High and Claremore High School, graduating in the Class of 1975. He furthered his education by attending college at Northeastern State University in Tahlequah, OK, where he played college football for the Redmen and received his Bachelors Degree in Education. After college, Steve’s passion for sports led him to his first job in the early 1990’s coaching football at Memorial High School in Tulsa Oklahoma where he later become the Head Coach. During this time in 1993 Steve was introduced to Kim by her daughter Lindey, and the inseparable bond began. They met in January and were married the following May. Their journey of life included homes in Tulsa, Bixby and currently Claremore Oklahoma. Steve’s career also included positions at Edison High School and Catoosa High School, where he was involved in teaching, coaching and driver’s education. He was currently retired from teaching. Steve’s passions in life were family and friends. His true beliefs and faith in God were a testament to his actions, the life he lived and the way he treated everyone around him. He was a deeply devoted and loving family member to all. The bond of friendship to Steve was a special relationship known by all who were close to him. Steve especially enjoyed spending time with his family and reminiscing with his friends., He loved music, especially the Beatles. Animals and children seemed to bring out some of Steve’s best qualities. He was a true mentor to the younger generation, and he loved his dogs, taking them to Claremore Lake for a walk nearly every day. Steve was preceded in death by his sister Katherine LeGate, father Dick LeGate, mother Elizabeth LeGate, brother Richard LeGate and sister-in-law Jarol LeGate. Survivors include wife Kim Legate; daughter Lindey Robbins & husband Bill Navarette; Sons Ryan Robbins and Matt Robbins; Nieces and Nephews Jane and Bruce Clarke and their children Cole and Carson, Darin and Linda Richter and their children Trevor and Robby; Grandchildren Hunter, Gabby, Colton, Teagan, London, Caden, Levi, and Abbi. In Lieu of Flowers donations can be made to City of Lights Foundation of Oklahoma. https://citylightsok.org/

The family of Robert Steven LeGate created this Life Tributes page to make it easy to share your memories.

Funeral services for Robert Steven LeGate will be held at 3:00...

Send flowers to the LeGate family.