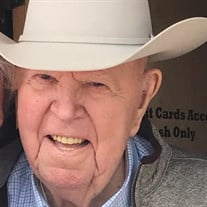 Lifelong cattleman Roger Morris, 95, crossed over to greener pastures on October 11, 2021. Roger was born October 1,1926, to Joe and Mary McCoy Morris at his grandparent’s ranch in Rogers County outside Chelsea, Oklahoma. Roger grew up on the ranch with his older sister, Betty, walking two miles to the Catale schoolhouse "uphill both ways." "Bud" attended Chelsea Junior and Senior High Schools where he excelled in basketball and football, graduating with the class of 1944. After enrolling at Oklahoma A&M with the intention of becoming a large animal veterinarian, Roger joined the Navy on his 18th birthday against his father's wishes. After the end of WWII, Roger returned home where he spent several years rodeoing as a competitive calf roper. He married Wyvonna Wyatt in Chelsea in 1954 and moved to Tulsa. Once they started a family, Roger left rodeo to become a livestock broker at The Tulsa Stockyards with Hyatt and Ward Livestock Brokerage, buying and selling cattle for local ranchers. Thus, a workaholic was created! In 1958, Roger opened Roger Morris Livestock Commission Company, which he operated for the next four decades. Roger loved nothing more than buying land, growing the best grass, and raising the highest quality cattle for his clients and himself. In his own words, it was both his lifeline and his golf game. Roger and Wyvonna's marriage ended in divorce, but they remained close friends. In 1980, Roger and childhood friends Clem McSpadden and Jack Marshall built People's State Bank of Rogers County in Claremore. While Roger hated being behind a desk, he became President and CEO out of necessity and bad luck of the draw. The partners sold the bank in 1995 to the Buerge Family who renamed it Grand Bank. In 1992, Roger moved from Tulsa to the ranch where he was born and lived out his days on earth buying and selling cattle and land. Daily, Roger would drive up and down Highway 66, averaging 40 mph, checking the fence lines, grass, cattle and rain gauges; not by horseback but by Cadillac- slowing traffic for miles. Roger was preceded in death by his mother Mary McCoy Morris, father Joe Morris, stepmother Inez Bowman Morris, and sister Betty Bales. He is survived by his daughter Vickye Morris Madewell, her husband Alan, and grandson Sterling Austin Morris Sims, all of Tulsa. Other survivors include niece Jody Bales Foote of Norman and nephew Roger Bales of Scottsdale, Arizona. A celebration of Roger's life will be held at his ranch on Saturday, October 16, 2021, at one o'clock in the afternoon. In lieu of flowers please contribute to your favorite charity. Roger took great pride in helping those in need

The family of Roger Morris created this Life Tributes page to make it easy to share your memories.

Send flowers to the Morris family.