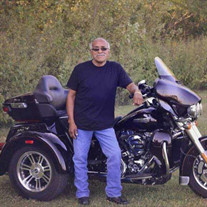 Roger Wolf was born February 24, 1950 in Claremore, Oklahoma, to Palmer and Josephine (Billy) Wolf. He was one of six children and grew up in the west Tulsa area. Roger finished Webster High School early after his sophomore year, and went to work to help support his family. His father died when Roger was seven years old and it was necessary to help wherever he could, and at this point in his life work was more important than school. His plans were interrupted by his military service. Roger joined the United States Marine Corps and served honorably during the Vietnam War before returning to Tulsa. Following his service, he went to work delivering welding supplies and from this point going forward he focused on his family, his work, playing softball, and living out his faith. Shortly after Roger was born, Josephine noticed that Roger bore an amazing resemblance to the Japanese Emperor during WW2, ToJo. To most of his relatives and friends, Roger was now ToJo. Several weeks ago, Roger had a knee replacement surgery. The surgery went well, but he suffered several heart problems that forced him back into the hospital and eventually his health went south, and COVID took a heavy toll on him. Roger lapsed into a coma from which he never recovered. On the evening of December 28th, Roger quietly passed away. Rogers was preceded in death by: his father, Palmer and his brother, Doug. He is survived by his wife; Karen of the home, mother; Josephine, brothers; Jack, Butch, Chuck, Guthrie, and Brian Zinter, sisters; Karen, and Peggy, children; Robert, Tina, Shannon, and Heath, grandchildren; Brandon, Laine, Makynlee, Abel, Jaxon, Nash, Reagan, Lexi, Derrick, Ryan, Cody, and Robbie, great grandchildren; Emah, Hayden, Amelia, Addie, Jaxon, Ryker, and Jace, along with many nieces and nephews.

Roger Wolf was born February 24, 1950 in Claremore, Oklahoma, to Palmer and Josephine (Billy) Wolf. He was one of six children and grew up in the west Tulsa area. Roger finished Webster High School early after his sophomore year, and went... View Obituary & Service Information

The family of Roger Wolf created this Life Tributes page to make it easy to share your memories.

Send flowers to the Wolf family.