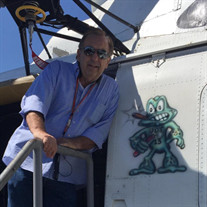 Rusty Jay Woods was born August 12, 1957, in San Diego, California, to Floyd Duke Sliger and Mablee Rachelle (Warren) Woods. While he met his biological father later in life, he was adopted as a child and raised by his mother’s husband Riley Woods. He attended schools in Whittier, California, but finished his senior year at Coweta High School, after his family moved to Oklahoma. Following his graduation, Rusty enlisted with the US Air Force and proudly served his country. After he was honorably discharged from the Air Force, he returned to Oklahoma, where he was married and blessed with three daughters. While living in Oklahoma, he worked for a time with the Catoosa Police Department. In 1997, Rusty moved back to California where he started his construction company, Rusty Woods Construction, through which he successfully contracted many beautiful custom homes in the Palm Springs area. In 1999 he met Kim Lydia McEwen. They married in 2001 and California remained their home.  Rusty was a jack of all trades and could fix or make just about anything he set his mind to.  He was very meticulous in all of his endeavors and worked hard until the job was finished. The hobby he most enjoyed was restoring cars. He had many projects over the years, but his 1967 Mustang fastback that was signed by Carroll Shelby was his most favorite. It was beautifully restored and received a lot of attention at the Barrett-Jackson Auction. Rusty also had a love of El Caminos, having several spanning many years. His daughters lovingly referred to them as his car-trucks. The love of his family was most important and he cherished the time spent with them. He had a huge heart and a big laugh and would help anyone in need.  Surviving family members include his wife Kim Woods of Indio, CA; his daughters Sarah Woods and husband Robert Woods of Sperry, OK, Cassie Woods Howell and husband Brett Howell of Claremore, OK, and Lauren Merriman and husband Walter Merriman of Farmington, AR; his grandchildren Jaxon Woods, Brooke Woods, Jocelyn Howell, Elijah Howell, Charlee Merriman, and Evelynn Merriman; his brothers Jim Woods and Michael Woods. Rusty was preceded in death by his parents and his beloved four-legged son, Henley.

Rusty Jay Woods was born August 12, 1957, in San Diego, California, to Floyd Duke Sliger and Mablee Rachelle (Warren) Woods. While he met his biological father later in life, he was adopted as a child and raised by his mother&#8217;s husband... View Obituary & Service Information

The family of Rusty Jay Woods created this Life Tributes page to make it easy to share your memories.

Send flowers to the Woods family.