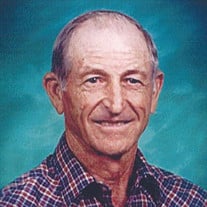 Funeral service for Sidney Kellehan will be held 10:00 a.m. Tuesday, March 3, 2020 at First Baptist Church in Claremore. Pastor Sam Nichols will officiate. Burial will follow at Oakhaven Memorial Gardens. Visitation will be held on Monday, March 2, 2020 at the MMS-Payne Funeral Home. Family will greet friends from 6-8 p.m Sidney passed away on Saturday, February 29th, 2020 at his home. He was 90 years old. The son of Willie and Myrtle Beatrice Wallis Kellehan was born June 30th, 1929 at his family's homestead in Claremore. He would attend Harmony Star Elementary, before attending Sequoyah High School. He was a member of the graduating class of 1947. Immediately after graduating Sidney headed out west to work the wheat harvest. In the years to follow he would also work the pipeline and for Phillips Petroleum. However, things changed for him in March of 1952. He was called to serve in the United States Army during the Korean Conflict. He served until being honorably discharged in February of 1954. Upon his discharge, he returned home to the Claremore area. Wanting to further his education, he used the GI Bill to enroll at Oklahoma State University. There he would earn a Bachelor's degree in education. On August 6, 1960, Sidney married Rosetta Marie Light in Sequoyah. The newlywed couple continued living in the Claremore area. There they would begin raising their family. Sidney began his teaching career at Sequoyah schools. He would teach math as well as coach boys and girls basketball and baseball. In the years to follow he would leave Sequoyah to serve as middle school principal at Foyil. One year later he left to begin teaching at Chelsea. He retired from there in December of 1985. Although he retired from teaching, he didn't retire from his other job as a bus driver. Sidney loved driving the bus. In total between driving for his schools and for Northeast Vo-Tech, he had close to 50 years of transporting students. In his spare time Sidney enjoyed many things. He loved being outdoors; gardening, cutting wood, and tending to his cattle were a few of his favorites. He also found time for things like fishing and baling hay. Being a retired coach, he also enjoyed watching sports. It really didn't matter which team or ball they were using, he truly loved the game. Sidney was quite the visitor as well. He loved visiting his First Baptist Church family, and often returned to school reunions to visit with many of his students and colleagues. However, his true love and passion was being with his family. He is preceded in death by his parents, Willie and Beatrice Kellehan, and brothers, Gail and Leon Kellehan. Survivors include his wife Rosetta Kellehan; daughters, Pam Davis and Kim James and husband Tom Castle; grandchildren, Joshua James and wife Kaylee, and Shane Davis; great-grandchildren, Ethan James, and Gracie James; siblings, Wayne Kellehan, Lynn Kellehan and wife Joan, Byron Kellehan and wife Connie, and Wilma Yocham and husband John, along with many nieces and nephews. View and sign Sidney's online tribute at www.mmsfuneralhomes.com.

The family of Sidney Kellehan created this Life Tributes page to make it easy to share your memories.

Funeral service for Sidney Kellehan will be held 10:00 a.m. Tuesday,...

Send flowers to the Kellehan family.