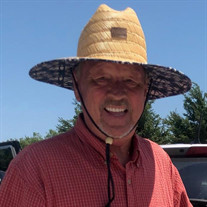 Graveside service for Tom Girten will be held 11:00 a.m. Wednesday, February 24, 2021 at the Chelsea Cemetery. Tommy Irvin Girten passed away on Saturday, February 20th, 2021 at the age of 70. Born February 19, 1951, at home in Winganon, to Loyal and Wilma (Wilson) Girten, Tom spent his childhood in the Winganon area. He attended Waller School until it closed his 6th grade year. Tom transferred to Chelsea where he enjoyed playing football and serving on the student council. Chelsea is where he met Wanda Waldrup, who he would later marry on July 6, 1973. After graduating in 1969, Tom continued his education at Northeastern State University where he earned his Bachelors in education in 3 years. In 1972 Tom took his first job working as a Junior High counselor in Skiatook. Over the next few years, Tom not only worked for Skiatook Schools, he also continued his education earning his Masters. In the years to follow, Tom would take a job as principal at Chelsea, a counselor at Pryor Schools and then finished his career at Northeast Tech as Director of Student Services, retiring in 2011. In his spare time Tom had many hobbies and past times. He enjoyed cooking, and his family enjoyed eating. Woodworking, restoring cars, and traveling , especially to Las Vegas were always at the top of his to do list. He enjoyed watching golf, and loved telling the stories of his trip to the Master's Tournament in Augusta in 2017. Spending time with his family, especially his grandchildren was what he enjoyed the most. He is preceded in death by his parents Loyal and Wilma, siblings Bill Girten, Judy DeLozier, and Bob Girten. Survivors include his wife Wanda, son Jerad Girten and wife Jamie, daughter Brandi Payne and husband Ryan; Grandchildren: Grey and Gage Girten, Annie Kate, Alivia, and Allie Grace Payne; Brother Jim Girten and wife Lisa, and many nieces, nephews, and cousins.

The family of Tommy Irvin Girten created this Life Tributes page to make it easy to share your memories.

Graveside service for Tom Girten will be held 11:00 a.m. Wednesday,...

Send flowers to the Girten family.