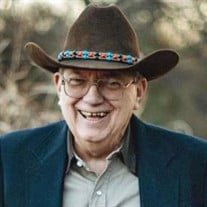 Memorial service for Tommy Clark Morrison will be 11:00 a.m. Tuesday, August 31, 2021 at MMS-Payne Funeral Home Chapel in Claremore. Tommy passed away Thursday, August 26, 2021, at the age of 74. The son of Thomas Jefferson and Sylvia Aileen (Fry) Morrison was born on New Year's Eve, 1946, in Nowata, OK. He attended and graduated from Alluwe School. After high school, he attended OMA for a short time before being drafted into the U.S. Army. On June 4, 1965, he married Saundra Wells. After his discharge from the Army in 1968, they made their home in Chelsea. After Saundra preceded him in death, he met Carol Wassam in 2015. The two were married on April 24, 2021. Tommy began work as a draftsman for the Oil, Gas, and Nuclear industry. He continued this career until his health forced an early retirement about 35 years ago. He was also a Methodist minister who served as a fill-in minister in many communities in northeast Oklahoma, including Alluwe, and Childress. He was a member of the local chapters of DAV, VFW, and American Legion. In his spare time, he enjoyed traveling, spending time fishing at the lake, hunting, camping in his RV, golfing, and training horses. Tommy is preceded in death by his parents; wife Sandy; son-in-law Loris Burger, III; and grandchildren Jack Grissom and Tiffany Dorsey. Survivors include his wife Carol; his daughters Christy Hinton and husband Bob, Lisa Grissom and husband Michael, Jeanie Dorsey and husband Joe, and Tommie Michelle Benshoof and husband Frank; brothers Mike Morrison and wife Ann, and David Morrison and wife Marcia; sister Mary Lewis and husband Jack; grandchildren Aime, Megan, Robert, Amanda, Joshua, Emily, Jacob, Max, Dalton, Dakota, Gavin, Landon, Ethan, Kyle, and Owen; twenty-one great-grandchildren; his dog Rascal, a.k.a. Rat; along with a host of friends and extended family. View and sign Tommy's online memorial at www.mmsfuneralhomes.com.

Memorial service for Tommy Clark Morrison will be 11:00 a.m. Tuesday, August 31, 2021 at MMS-Payne Funeral Home Chapel in Claremore. Tommy passed away Thursday, August 26, 2021, at the age of 74. The son of Thomas Jefferson and Sylvia... View Obituary & Service Information

The family of Tommy Clark Morrison created this Life Tributes page to make it easy to share your memories.